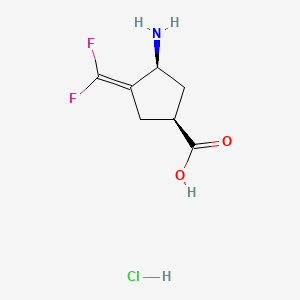 Cpp-115: An Investigational Drug For Epilepsy

The fact that 1 in 12 people will have a seizure in their lifetime raises alarming signals to mitigate, prevent and cure epilepsy. The etiology is still unclear, but one of the pharmaceutical strategies to treat seizures is to replenish the local concentrations of GABA (gamma-aminobutyric acid, an inhibitory neurotransmitter in the human brain) that is degraded by an enzyme called GABA aminotransferase (GABA-AT). Mere consumption of GABA capsules is not effective, due to its inability to cross the blood-brain barrier (BBB). Therefore, an alternative strategy that involved stopping the function of GABA-AT was envisioned. Sabril is a first-in-class, FDA-approved antiepileptic drug; however, its daily dosage limit (1g – 3g) and adverse side effects, which include vision defects, call for further innovation.

CPP-115 binds to GABA-AT (GABA-aminotransferase, also known as GABA transaminase or GABA-T), causing increased levels of GABA, gamma-aminobutyric acid, the chief inhibitory neurotransmitter in humans. It plays a role in regulating neuronal excitability throughout the nervous system. In humans, GABA is also directly responsible for the regulation of muscle tone.

In preclinical studies CPP-115 has been shown to have potentially significant advantages compared to the only approved and marketed current GABA-AT inhibitor (vigabatrin). CPP-115 may not cause the visual field defects associated with chronic administration of vigabatrin and it has been shown to be at least 200 times more potent in both in-vitro and animal model studies. The increased potency could enable the development of superior or alternative dosage forms and routes of administration. Catalyst hopes these important benefits will allow it to develop CPP-115 for a broad range of other central nervous system indications, such as infantile spasms, epilepsy, Tourette Syndrome and Post Traumatic Stress Disorder (PTSD). Additionally, Catalyst is exploring other selected diseases in which modulation of GABA levels might be beneficial. Catalyst believes that it controls all current intellectual property for GABA-aminotransferase inhibitors.

CPP-115 has received orphan drug designation in both the US and the EU for infantile spasms. Catalyst has begun the clinical development of CPP-115 by completing a randomized, double-blind, single ascending dose Phase I(a) study in normal healthy volunteers to evaluate the human safety characteristics of CPP-115, including CNS side effects and respiratory and cardiovascular safety. The Company reported results which indicated that CPP-115 was well tolerated at all six doses administered up to 500 mg, well above the anticipated therapeutic dose of up to 80 mg/day.

The hydrochloride salt of CPP-115 (PubChem CID 71252718) has been granted orphan drug designation by the EMA for the treatment of West syndrome, an epileptic disorder of young children which causes developmental problems. West syndrome is a long-term debilitating disease which may be life threatening as it can lead to severe damage to motor and cognitive functions. CPP-115 may have additional therapeutic applications for treating other neurological disorders, including drug addiction [4]. A single Phase I clinical trial has assessed CPP-115 as a treatment for cocaine addiction [3], but development has not progressed further.

Previously it was found that a conformationally rigid analogue (2) of the epilepsy drug vigabatrin (1) did not inactivate γ-aminobutyric acid aminotransferase (GABA-AT). A cyclic compound with an exocyclic double bond (6) was synthesized and was found to inactivate GABA-AT, but only in the absence of 2-mercaptoethanol. The corresponding difluoro-substituted analogue (14) was synthesized and was shown to be a very potent time-dependent inhibitor, even in the presence of 2-mercaptoethanol.

The research in my group can be summarized as investigations of the molecular mechanisms of action, rational design, and syntheses of potential medicinal agents, particularly for neurodegenerative diseases. Numerous drugs are known to function as specific inhibitors of particular enzymes. When little is known about the enzyme’s molecular mechanism of action, chemical model studies are designed to determine reasonable nonenzymatic pathways applicable to the enzyme. Based on the proposed mechanism of enzyme action, inhibitors are designed and synthesized. Organic synthesis is a primary tool for this work. The enzymes are isolated from either mammalian tissue or from overexpressed cells containing recombinant enzymes. Active site labeling studies utilize MALDI TOF and electrospray ionization mass spectrometry as well as radiolabeled inactivators and peptide mapping. We also are synthesizing compounds to act as receptor antagonists for important receptors related to neurodegenerative diseases.

In recognition of his outstanding work in applied chemistry, the Society of Chemical Industry 2009 Perkin Medal has been awarded to Richard B. (Rick) Silverman, the John Evans Professor of Chemistry at Northwestern University. The Perkin Medal, which was first awarded just over one century ago, is recognized as one of the chemical industry’s most prestigious awards.

Silverman’s research primarily focuses on medicinal chemistry: studying the molecular basis of drug action, reaction mechanisms of enzymes, and design and synthesis of pharmaceutical agents. He has worked to deepen understanding of several diseases, including epilepsy, cancer, Parkinson’s, and cerebral palsy.

Among Silverman’s many scientific accomplishments, designing pregabalin and discovering the medicinal properties of that compound stand out for catapulting him and Northwestern to pharmaceutical fame and fortune. Pregabalin, a γ-aminobutyric acid analog, is the active substance in Lyrica, a pain and epilepsy medication commercialized by drug giant Pfizer.

In 2007, after Northwestern collected more than $70 million in royalties for the drug, the university sold a portion of its royalty rights for an additional $700 million (C&EN, March 10, 2008, page 56). Around the same time, Silverman and his family donated a portion of their earnings from the drug to fund construction of a new Northwestern science building. The facility, which is scheduled to open this fall, will house chemistry, biology, and engineering research groups devoted to biomedical science.

Silverman has published more than 250 papers in organic chemistry, medicinal chemistry, and enzymology. He is also the author of three books, including “The Organic Chemistry of Drug Design and Drug Action,” and holds 40 patents.

The Perkin Medal is named for Sir William Henry Perkin (1838–1907), who was honored by SCI in 1906 for developing the first synthetic dye, Perkin mauve. This year’s medal will be presented at SCI’s Perkin Medal banquet in Philadelphia in September.

The Legacy Of Lyrica

Northwestern’s Richard Silverman, professor of chemistry, developed pregabalin, the chemical that Pfizer now markets as Lyrica.  The drug is one of the two approved treatments for fibromyalgia, epilepsy, and the most effective treatment for seizures as well.

In his laboratory, Silverman’s research team studied chemicals made in the brain. Of particular interest was GABA, a neurotransmitter that inhibits certain brain functions. When GABA levels fall too low in some people, it can trigger epileptic seizures. His group studied enzymes that affect GABA levels, looking for ways to keep GABA elevated.  In 1989, the Parke-Davis unit of Warner-Lambert was interested in the research findings. Among the 17 chemical analogs that Silverman sent to Parke-Davis, only pregabalin showed effects in mice.

Serendipity played a huge part in shaping this success story, as most chemicals that affect cells in lab experiments do not survive inside an animal. Another outcome of the research was that the compound was effective for a reason entirely different from Silverman’s initial goal of producing more GABA. In another stroke of luck, the molecule happened to be of the right shape to be transported directly into the brain with nearly 90 percent efficacy.

Lyrica has been a tremendous medical and commercial success that has validated the nearly 15 year process from invention to market launch in 2005. In 2004 Lyrica was approved for use in adults for the treatment of various peripheral neuropathic pain indications as well as therapy for partial epilepsy in more than 60 countries outside of the United States. In 2006 Lyrica was also approved for the treatment of generalized anxiety disorder in Europe. The drug brought in $1.2 billion in sales in 2006 and in 2010 was approved in Europe to treat central neuropathic (nerve) pain. This is expected to push profits from the blockbuster drug to climb even higher.

Northwestern sold a sizeable amount of royalty interest in 2007 to Royalty Pharma, a company that specializes in acquiring cash-generating intellectual property, for $700 million to help the university’s endowment. This deal has been termed the largest sale ever of a royalty stream for a pharmaceutical product.

To learn more about Lyrica visit the product website at www.lyrica.com.