Gadodiamide is a gadolinium-based MRI contrast agent, used in MR imaging procedures to assist in the visualization of blood vessels. It is commonly marketed under the trade name Omniscan.

For intravenous use in MRI to visualize lesions with abnormal vascularity (or those thought to cause abnormalities in the blood-brain barrier) in the brain (intracranial lesions), spine, and associated tissues. Gadodiamide is a contrast medium for cranial and spinal magnetic resonance imaging (MRI) and for general MRI of the body after intravenous administration. The product provides contrast enhancement and facilitates visualisation of abnormal structures or lesions in various parts of the body including the central nervous system (CNS). It does not cross an intactblood brain barrier but might give enhancement in pathological conditions.

Based on the behavior of protons when placed in a strong magnetic field, which is interpreted and transformed into images by magnetic resonance (MR) instruments. Paramagnetic agents have unpaired electrons that generate a magnetic field about 700 times larger than the proton’s field, thus disturbing the proton’s local magnetic field. When the local magnetic field around a proton is disturbed, its relaxation process is altered. MR images are based on proton density and proton relaxation dynamics. MR instruments can record 2 different relaxation processes, the T1 (spin-lattice or longitudinal relaxation time) and the T2 (spin-spin or transverse relaxation time). In magnetic resonance imaging (MRI), visualization of normal and pathological brain tissue depends in part on variations in the radiofrequency signal intensity that occur with changes in proton density, alteration of the T1, and variation in the T2. When placed in a magnetic field, gadodiamide shortens both the T1 and the T2 relaxation times in tissues where it accumulates. At clinical doses, gadodiamide primarily affects the T1 relaxation time, thus producing an increase in signal intensity. Gadodiamide does not cross the intact blood-brain barrier; therefore, it does not accumulate in normal brain tissue or in central nervous system (CNS) lesions that have not caused an abnormal blood-brain barrier (e.g., cysts, mature post-operative scars). Abnormal vascularity or disruption of the blood-brain barrier allows accumulation of gadodiamide in lesions such as neoplasms, abscesses, and subacute infarcts.

Gadolinium contrast agents are used as contrast media to enhance magnetic resonance imaging as they are paramagnetic. This compound has a low incidence of adverse side effects, although there is a rare association with nephrogenic systemic fibrosis (NSF) when given to people with severe renal impairment (ie, GFRglomerular filtration rate <30mL/min/1·73m2).It seems to be related to the liberation of free gadolinium ions, and UK CHM advice is against using the least stable of the agents – Omniscan (gadodiamide) – in patients with severe renal impairment, and carefully considering whether to use others where renal function is impaired.

OMNISCAN (gadodiamide) Injection is the formulation of the gadolinium complex of diethylenetriamine pentaacetic acid bismethylamide, and is an injectable, nonionic extracellular enhancing agent for magnetic resonance imaging. OMNISCAN is administered by intravenous injection. OMNISCAN is provided as a sterile, clear, colorless to slightly yellow, aqueous solution. Each 1 mL contains 287 mg gadodiamide and 12 mg caldiamide sodium in Water for Injection.

Pertinent physicochemical data for OMNISCAN are noted below:

OMNISCAN has an osmolality approximately 2.8 times that of plasma at 37°C and is hypertonic under conditions of use.

[0005] Magnetic resonance contrast agent gadodiamide resonance than ionic contrast agents safer generation of products, it is non-ionic structure significantly reduces the number of particles in solution, osmotic balance of body fluids is very small.Meanwhile, gadodiamide relatively low viscosity to bring the convenience of nursing staff, making it easier to bolus. In addition, gadodiamide pioneered the use of amide-substituted carboxyl part, not only reduces the toxicity of carboxyl groups and ensure the non-ionic nature of the product solution.

[0006] reported in the literature and their intermediates gadodiamide synthetic route is as follows:

[0007] 1. Compound III synthetic routes for its preparation in U.S. Patent No. US5508388 described as: In the synthesis process, the inventors using acetonitrile as solvent, acetic anhydride as dehydrating agent, pyridine as acid-binding agent, at 55 ~ 60 ° C, the reaction 18h. Anti-

See the reaction should be a process. The disadvantage of this synthesis are acetonitrile toxicity, not widely used.

[0010] (2) Synthesis of Compound III in many articles are reported in the patent and its implementation method similar to the patent US5508388.

[0016] The above patents do not provide for the compound III is post-processing method.

[0021] In the patent US5087439, the compound III with methylamine in aqueous solution for several hours, or overnight reactions, see reaction formula III.

[0024] These two patents using ammonia and methylamine, which can form explosive mixtures with air, in case of fire or high pressure can cause an explosion in the production process of great insecurity. Although raw material prices are lower, but higher production conditions (such as requiring sealed, low temperature, etc.). Compared to this synthesis process,

[0026] In the patent US4859451, the use of gadolinium chloride with the compound IV is carried out under acidic conditions, complexing. Finally, tune

[0028] Reaction formula tetrakis [0029] in the patent US5087439, the chlorides are used as reactants, and details of the post-processing method of Compound I.

[0030] In the patent US5508388, the use of gadolinium oxide with compound IV in acetonitrile, water with stirring, the resulting compound I. 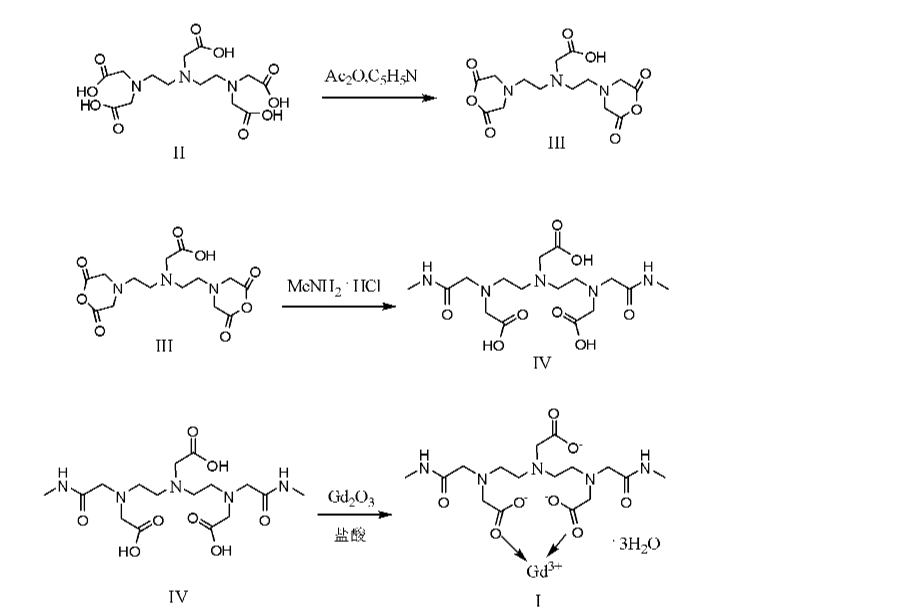 [0035] 2) Compound III in DMF with methylamine hydrochloride, the reaction of the compound IV (5,8 _ bis carboxymethyl methyl-11 – [2 – (dimethylamino) -2 – oxoethyl] – 3 – oxo -2,5,8,11 – tetraazacyclododecane _13_ tridecyl acid); and the control compound III: MeNH2 · HCl molar ratio = 1: (1 to 4), control the temperature between 20 ~ 80 ° C, the reaction time is 4 ~ 6h, after the treatment, the method of distillation under reduced pressure to remove DMF, the product is dissolved in a polar solvent, methanol, and then adding a solvent polarity modulation, so that the target Compound IV from system completely precipitated;

[0036] 3) Compound IV with gadolinium oxide formed in the presence of hydrochloric acid of the complex, after the reaction, filtration and drying, to obtain a white powdery compound I, i.e. gadodiamide.

[0037] Existing gadodiamide Synthesis basically from the synthesis of Compound IV as a starting material, the present invention is first introduced to the compound II as a starting material to synthesize gadodiamide. Synthesis of the conventional method of gadodiamide, the present invention has the advantage of inexpensive starting materials, convenient and easy to get. In addition, the synthetic pathway intermediates are involved in the post-processing is simple, enabling continuous reaction, saving time and cost savings, the reaction becomes controlled step by step, and try to avoid the use of toxic reagents, reducing the possibility of operator injury , while also greatly reducing damage to the environment.