Glenmark Pharmaceuticals is a pharmaceutical company headquartered in Mumbai, India. [6] It manufactures and markets generic formulation products and active pharmaceutical ingredients (API), both in the domestic and international markets. In the formulation business, its business spans segments such as Dermatology, Internal Medicine, Paediatrics, Gynaecology, ENT andDiabetes. 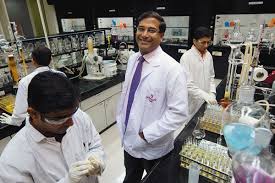 Every Tuesday, unmindful of the gridlocked traffic, Glenn Saldanha, the 43-year-old Chairman of Glenmark Pharmaceuticals Ltd, or GPL, makes it a point to visit his research centre at Mahape in Navi Mumbai. It is the hub of Glenmark’s focus on creating new chemical entities, or NCEs, R&Dspeak for original drugs. Leading the innovation for Saldanha are his lab coat-clad scientists and researchers peering into the test tubes, burettes and pipettes at the Mahape facility.

“Almost 30 to 40 per cent of my time spent on business goes into issues relating to innovation,” he says. That includes thinking about research strategy, deciding on which chemical targets to focus on and which therapeutic segments to chase, and even hiring key R&D talent. Today, out of Glenmark’s 600-odd scientists, 400 are involved in NCE research.

The past 13 years have convinced the ardent admirer of Steve Jobs, the iconic former CEO of Apple, that the future lies in innovation. “If you look at how some of the largest corporations of the world were built, it is clear you need to have innovative products,” says Saldanha, a pharmacist by training, who voraciously reads scientific journals to stay updated on current scientific thought and trends. “Look at what Apple has created… that is the way to build a mega corporation, and that is the key reason why, despite our setbacks, we believe so heavily in innovation.”

Creating an NCE has been the Holy Grail for Indian pharma companies, including giants such as Dr Reddy’s Laboratories and Ranbaxy Laboratories (now owned by Daiichi Sankyo of Japan), but without any major success so far. These companies have reviewed their focus on NCE research and some branched into related activities like differentiated products. So has Glenmark, but it also soldiers on with drug discovery as its key focus area. With five molecules currently undergoing trials in various phases, the company now leads the charge of the Indian drug research industry.

Even one successful launch, say that of revamilast (for asthma and rheumatoid arthritis), which has potential peak sales of $2 billion worldwide, could change the fortunes of the company, though one can never be sure till it actually happens. Next year, Glenmark is likely to have half a dozen compounds in Phase II human trials. Saldanha hopes to hit the market with one or more of his drugs between 2015 and 2017. This potential upside is precisely why Glenmark is in this listing of Tomorrow’s Goliaths, and not any of the other bigger or faster-growing companies.

Undiminished zest
“Every year we expect two more molecules to get into clinical trials,” says Saldanha, his zest undiminished by past failures. “In 2008, in a span of one or two quarters, our entire pipeline pretty much got wiped out, but we never lost our commitment and passion.” At that time its most advanced molecule, oglemilast, used for treating patients with chronic obstructive pulmonary disease, had to be abandoned when its Phase IIb trials produced unsatisfactory results. It also had to suspend clinical development of GRC 6211, a compound for treating osteoarthritis pain, because of side effects.

Unlike other companies that reduced NCE development efforts when faced with similar situations, Glenmark persevered. “We never downsized our research team and did not cut back on budgets,” says Saldanha. “We did not even cut travel and our scientists continued to participate in major global conferences.” It is hardly surprising that his core R&D team has stayed put. Consider Neelima Joshi, 48, Senior Vice President and Head of NCE R&D, who was part of the dozen-odd people who set up the Mahape facility in 2000.

Even then, she says, Glenmark’s management was clearly focused on innovation and the move was in anticipation of the product patent regime that was to come in 2005. It was the impending change in India’s patent law that shaped the mind of the 29-year-old Saldanha in 1998, when he returned to India after working with Eli Lilly and PricewaterhouseCoopers to run his father Gracias Saldanha’s formulations business. After India became a signatory to General Agreement on Tariffs and Trade, it changed its patent law in 2005 from a process patent, which encouraged creation of copies of blockbuster original drugs with minor process changes, to a product patent, where the original drug’s patent itself is recognised in India, thereby prohibiting the creation of copies. This key change, and Saldanha’s passion for research, convinced him to steer Glenmark the NCE way.

However, not everyone agrees with Glenmark’s approach to NCE development, especially of giving away a promising molecule in the early stages to big multinational companies for further R&D. The argument: outlicensing a molecule at a later stage can give a company better valuations. The alternative is to do what Piramal Healthcare wants to – not outlicense. “We believe in taking the drug from the bench to market,” says Dr Swati A. Piramal, Vice Chairperson of Piramal Healthcare, which hopes to deploy the funds it got from sale of its formulations business to Abbott for its R&D efforts. “We are now at the end of the 10 years, having begun in 2002, and we hope between 2012 and 2015, we will hit the market with a new drug.”

While Piramal’s approach is a bench-to-market one, others such as Sun Pharma have developed a different model. Sun Pharma has created a separate research entity called Sun Pharma Advanced Research Centre, better known as SPARC, whose sustainability is built by making differentiated and innovative “generic-plus” products (in simple language, the risk is less, as the basic ingredient is known, but the company is developing a patented technology and a better-targeted product with intellectual property built in). What is more, the returns from this are to help fund the research programme.

On the other hand, Hyderabadbased Dr Reddy’s, one of the pioneers of India’s drug discovery journey, has today rationalised its research programme. It had, in fact, tried out a unique model of creating the country’s first integrated drug development company, Perlecan Pharma, which had equity capital commitments from ICICI Venture and other investors. But it soon saw the outside investors exit and brought back Perlecan into the Dr Reddy’s fold after delays in progress of candidates were not acceptable to some partners who had wanted early monetisation.

Beyond NCEs
Dr Reddy’s has now widened its scope beyond NCEs to differentiated products and formulations where improvements are made on existing products that have limited competition in the market. Its only Phase III candidate, balaglitazone, a diabetes drug, has yet to deliver the goods; the asset class it belongs to, glitazone, has had to deal with an overhang of safety concerns, especially in cases where there is a prolonged use of the drug. Yet, Dr Reddy’s sees sense in Glenmark’s model. “It is a viable model and a right strategy for a small company as Indian companies do not have the capacity to take the drug on their own to the market,” says Satish Reddy, Chief Operating Officer and Managing Director of Dr Reddy’s. “They will need to depend on upfront and milestone payments, and royalties.”

Analysts are cautiously optimistic as Glenmark will have some six compounds in Phase II only next year. Plus the fact that Glenmark has still not hit the market with a new drug weighs it down. “It has had no material success so far; they may make it big but it is difficult to say right now,” says a Mumbai-based analyst.

Even in 2000, our management was clearly focused on innovation and the move was in anticipation of the product patent regime that was to come: Neelima Joshi

On his part, Saldanha argues that he has already recovered his R&D investments. “Till date, we have spent about $120 million in innovation research; against that we have got around $200 million as upfront and milestone payments.”

Says Nomura Financial Advisory and Securities in a recent report: “Glenmark has generated outlicensing income every year from 2004/05 to 2011/12 – except 2008/09. Average licensing income has been Rs 1 billion over the eightyear period. With seven development assets in the pipeline, we believe Glenmark will be able to continue to book licensing income, although the quantum and timing cannot be predicted.”

With standalone revenues of Rs 1,154.63 crore and consolidated revenues of almost Rs 3,000 crore, Glenmark hopes to hit the $1-billion mark soon. And if one of the NCEs sails through, the impact on the topline will be significant – a huge distance travelled for a company that clocked less than Rs 100 crore in the late 1990s. Certainly, Saldanha’s long drives on the Mumbai roads to his R&D headquarters are proving worthwhile.