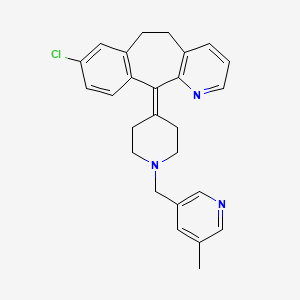 Uriach developed and launched rupatadine for treating of allergic rhinitis and urticaria. Family members of the product case EP577957, have SPC protection in the EU until 2016.

As of January 2015, Newport Premium™ reports that Cadila Pharmaceuticals is producing or capable of producing commercial quantities of rupatadine fumarate and holds an active USDMF since September 2012.

Rupatadine is a second generation antihistamine and PAF antagonist used to treat allergies. It was discovered and developed by J. Uriach y Cia, S. A.[1] and is marketed under several trade names such as Rupafin, Alergoliber, Rinialer, Pafinur, Rupax and Ralif.

Rupatadine fumarate has been approved for the treatment of allergic rhinitis and chronic urticaria in adults and children over 12 years. The defined daily dose (DDD) is 10 mg orally.

Rupatadine is available as round, light salmon coloured tablets containing 10 mg of rupatadine (as fumarate) to be administered orally, once a day.

Rupatadine is a non-sedating antihistamine. However, as in other non sedating second-generation antihistamines, the most common side effects in controlled clinical studies were somnolence, headaches and fatigue.

Rupatadine is a second generation, non-sedating, long-acting histamine antagonist with selective peripheral H1 receptor antagonist activity. It further blocks the receptors of the platelet-activating factor (PAF) according to in vitro and in vivo studies.[2]

The efficacy of rupatadine as treatment for allergic rhinitis (AR) and chronic idiopathic urticaria (CIU) has been investigated in adults and adolescents (aged over 12 years) in several controlled studies, showing a rapid onset of action and a good safety profile even in prolonged treatment periods of a year.[3][4][5]

The reaction of 2-cyano-3-methylpyridine (I) with H2SO4 in t-BuOH gives the N-tert-butylamide (II), which is treated with two equivalents of BuLi and the corresponding dianion alkylated with 3-chlorobenzyl chloride to afford amide (III). The treatment of (III) with POCl3 gives nitrile (IV) which is cyclized to ketone (V) by subsequent treatment with CF3SO3H and aqueous HCl. Reaction of ketone (V) with the Grignard derivative prepared from chloride (VI) affords alcohol (VII) which is finally dehydrated by H2SO4 to give UR-12592 (1), as shown in Scheme 20491401a. The key intermediate (VI) is synthesized through the condensation of 5-methylnicotinic acid (VIII) with 4-hydroxypiperidine by means of DCC in DMF to give amide (IX), followed by reduction with POCl3 and NaBH4 to give the amino alcohol (X) which is treated with SOCl2. Scheme 20491402a. Description White crystals, m.p. 196-8 癈. References 1. Carceller, E., Jim閚ez, P.J., Salas, J. (J. Uriach & Cia SA). Process for the preparation of 8-chloro-6,11-dihydro-11-[1-[(5-methyl-3-pyridinyl)methyl]-4 -piperidinylidene]-5H-benzo[5,6]cyclohepta[1,2-b]pyridine. ES 9602107.

The key intermediate (VI) is synthesized through the condensation of 5-methylnicotinic acid (VIII) with 4-hydroxypiperidine by means of DCC in DMF to give amide (IX), followed by reduction with POCl3 and NaBH4 to give the amino alcohol (X), which is treated with SOCl2.

Preparation of3-bromomethyl-5-methylpyridine hydrochloride: A mixture of carbon tetrachloride (4000ml), azobisisobutyronitrile (45.96gm, 0.279mol), 3,5-lutidine (150gm, 1.399mol) and N-bromosuccinamide (299.4gm, 1.682mol) is refluxed for 2 hours. The reaction mixture is cooled to room temperature and solid is filtered. HCl gas is passed to the filtrate and solid obtained is separated and filtered. Yield is 196gm Yield is 67.66%. Example 2

A mixture of desloratadine (5.0gm, 0.016mol), methylene chloride (15ml), tetrabutylammonium bromide (0.575gm, 0.0018mol) and sodium hydroxide solution (2.5gm, 0.064mol in 8ml water) is cooled to 0 to 50C. 3-bromomethyl-5- methylpyridine hydrochloride (7.18gm, 0.032mol) in methylene chloride (35ml) is added to above mixture. The reaction mixture is stirred at 0 to 50C for 1 hour and at room temperature for 12 hours. Layers are separated and organic layer is washed with dilute HCl solution and water. Methylene chloride is distilled. Yield = 9.5g %Yield =

A solution of fumaric acid (3.3gm) in methanol (46ml) is added to solution of

Rupatadine (4.5gm) in ethyl acetate (30ml) at room temperature. The reaction mass is cooled to -5 to O0C for 4 hours. Rupatadine fumarate is separated filtered and Washed with ethylacetate. Yield = 5.5 gm.

Process for the preparing rupatadine intermediate (particularly 5-methylpyridine-3-methanol) comprises reduction of 5-methyl nicotinic acid alkyl ester using alkali metal borohydride is claimed. For a prior filing see WO2006114676, claiming the process for preparation of rupatadine fumarate.