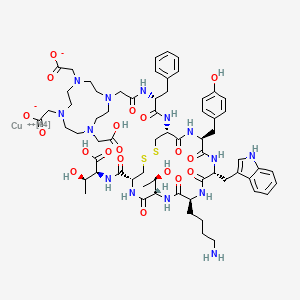 Copper Cu 64 dotatate, sold under the brand name Detectnet, is a radioactive diagnostic agent indicated for use with positron emission tomography (PET) for localization of somatostatin receptor positive neuroendocrine tumors (NETs) in adults.[1]

Common side effects include nausea, vomiting and flushing.[2]

It was approved for medical use in the United States in September 2020.[1][2]

The U.S. Food and Drug Administration (FDA) approved copper Cu 64 dotatate based on data from two trials that evaluated 175 adults.[3]

Trial 1 evaluated adults, some of whom had known or suspected NETs and some of whom were healthy volunteers.[3] The trial was conducted at one site in the United States (Houston, TX).[3] Both groups received copper Cu 64 dotatate and underwent PET scan imaging.[3] Trial 2 data came from the literature-reported trial of 112 adults, all of whom had history of NETs and underwent PET scan imaging with copper Cu 64 dotatate.[3] The trial was conducted at one site in Denmark.[3] In both trials, copper Cu 64 dotatate images were compared to either biopsy results or other images taken by different techniques to detect the sites of a tumor.[3] The images were read as either positive or negative for presence of NETs by three independent image readers who did not know participant clinical information.[3] 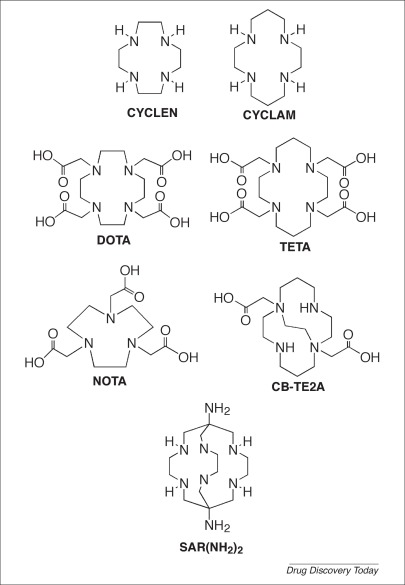 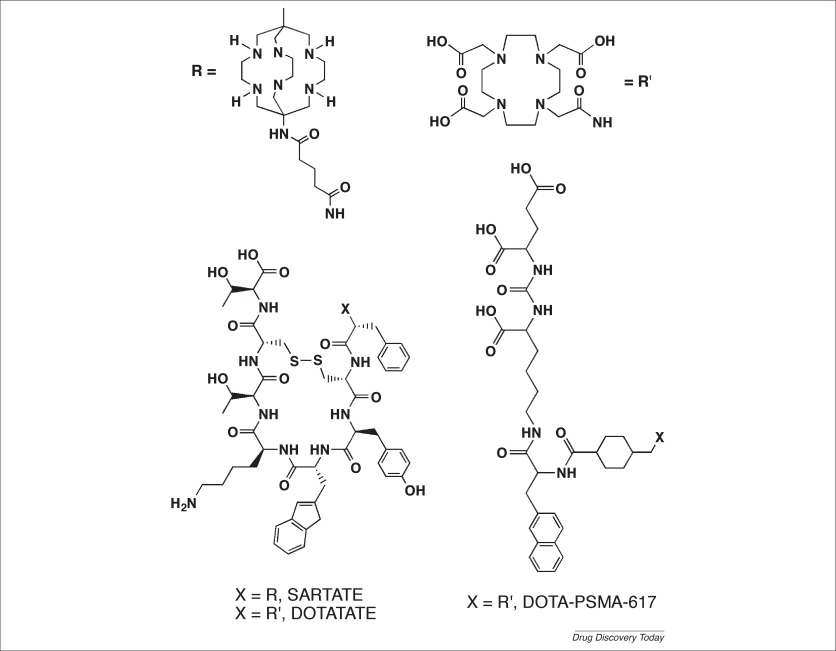 The FDA has approved copper Cu 64 dotatate injection (Detectnet) for the localization of somatostatin receptor–positive neuroendocrine tumors (NETs), according to an announcement from RadioMedix Inc. and Curium Pharma.1

The positron emission tomography (PET) diagnostic agent is anticipated to launch immediately, according to Curium. Doses will be accessible through several nuclear pharmacies or through the nuclear medicine company.

“Detectnet brings an exciting advancement in the diagnosis of NETs for healthcare providers, patients, and their caregivers,” Ebrahim Delpassand MD, CEO of RadioMedix, stated in a press release. “The phase 3 results demonstrate the clinical sensitivity and specificity of Detectnet which will provide a great aid to clinicians in developing an accurate treatment approach for their [patients with] NETs.”

“Perhaps most exciting is that the 12.7-hour half-life allows Detectnet to be produced centrally and shipped to sites throughout the United States,” added Delpassand. “This will help alleviate shortages or delays that have been experienced with other somatostatin analogue PET agents.”

Two single-center, open-label studies confirmed the efficacy of the diagnostic agent, according to Curium.2 In Study 1, investigators conducted a prospective analysis of 63 patients, which included 42 patients with known or suspected NETs according to histology, conventional imaging, or clinical evaluations, and 21 healthy volunteers. The majority of the participants, or 88% (n = 37) had a history of NETs at the time that they underwent imaging. Just under half of patients (44%; n = 28) were men and the majority were white (86%). Moreover, patients had a mean age of 54 years.

Images produced by the PET agent were interpreted to be either positive or negative for NET via 3 independent readers who had been blinded to the clinical data and other imaging information. Moreover, the results from the diagnostic agent were compared with a composite reference standard that was comprised of 1 oncologist’s blinded evaluation of patient diagnosis based on available histopathology results, reports of conventional imaging that had been done within 8 weeks before the PET imaging, as well as clinical and laboratory findings, which involved chromogranin A and serotonin levels.

Additionally, the percentage of patients who tested positive for disease via composite reference as well as through PET imaging was used to quantify positive percent agreement. Conversely, the percentage of participants who did not have disease per composite reference and who were determined to be negative for disease per PET imaging was used to quantify negative percent agreement.

Study 2 was a retrospective analysis in which investigators examined published findings collected from 112 patients; 63 patients were male, while 43 were female. The mean age of patients included in the analysis was 62 years. All patients had a known history of NETs. Results demonstrated similar performance with the PET imaging agent.

In both safety and efficacy trials, a total of 71 patients were given a single dose of the diagnostic agent; the majority of these patients had known or suspected NETs and 21 were healthy volunteers. Adverse reactions such as nausea, vomiting, and flushing were reported at a rate of less than 2%. In all clinical experience that has been published, a total of 126 patients with a known history of NETs were given a single dose of the PET diagnostic agent. A total of 4 patients experienced nausea immediately after administration.

“Curium is excited to bring the first commercially available Cu 64 diagnostic agent to the US market,” Dan Brague, CEO of Curium, North America, added in the release. “Our unique production capabilities and distribution network allow us to deliver to any nuclear pharmacy, hospital, or imaging center its full dosing requirements first thing in the morning, to provide scheduling flexibility to the institution and its patients. We look forward to joining with healthcare providers and our nuclear pharmacy partners to bring this highly efficacious agent to the market.”