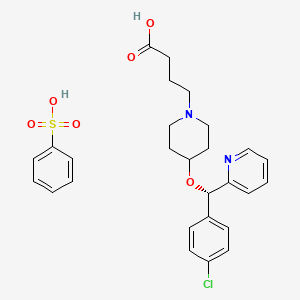 Drug Substance Bepotastine besilate is manufactured by Ube Industries and the information for the NDA is submitted through DMF #19966. Bepotastine besilate is a white crystalline powder with no odor and bitter taste. It is very soluble in but sparingly soluble in . It is stable when exposed to light, and optically active. The S-isomer is the active drug and is controlled as an impurity through synthesis. The distribution coefficient in 1-octanol is higher than in aqueous buffer in the pH 5-9 range. There are 10 potential impurities but only one impurity is above 0.1%. Two potential genotoxic impurities are controlled below . Residual is controlled below Bepotastine besilate is stable under long term storage conditions for (25ºC/60% RH) over 5 years

Bepotastine besilate was originally developed as an oral tablet dosage form and got approval in Japan in 2000 for allergic rhinitis. It is a non-sedating anti-allergic drug. The proposed NDA is an ophthalmic solution indicated for allergic conjunctivitis. Bepotastine besilate ophthalmic solution 1.5% is a sterile solution. It is an aqueous solution to be administered as drops at or near physiological pH range of tears. The formulation contains sodium chloride, monobasic sodium phosphate as dihydrate, benzalkonium chloride, sodium hydroxide and purified water; typically these components are used for , preservative action, pH adjustment,

Bepotastine is a non-sedating, selective antagonist of the histamine 1 (H1) receptor. Bepotastine was approved in Japan for use in the treatment of allergic rhinitis and uriticaria/puritus in July 2000 and January 2002, respectively, and is marketed by Tanabe Seiyaku Co., Ltd. under the brand name Talion. It is available in oral and opthalmic dosage forms in Japan. The opthalmic solution is FDA approved since Sept 8, 2009 and is under the brand name Bepreve.

Bepotastine (Talion, Bepreve) is a 2nd generation antihistamine.[1] It was approved in Japan for use in the treatment of allergic rhinitisand urticaria/pruritus in July 2000 and January 2002, respectively. It is currently marketed in the United States under the brand-name Bepreve, by ISTA Pharmaceuticals.

Originally developed at Ube, bepotastine besilate was later licensed to Tanabe Seiyaku as part of a collaboration agreement. In 2010, rights were licensed to Dong-A and Mitsubishi Tanabe Pharma in Korea for the treatment of eye disorders.

Bepotastine is available as an ophthalmic solution and oral tablet. It is a direct H1-receptor antagonist that inhibits the release of histamine from mast cells.[2] The ophthalmic formulation has shown minimal systemic absorption, between 1 and 1.5% in healthy adults.[3] Common side effects are eye irritation, headache, unpleasant taste, and nasopharyngitis.[3] The main route of elimination is urinary excretion, 75-90% excreted unchanged.[3]

It is marketed in Japan by Tanabe Seiyaku under the brand name Talion. Talion was co-developed by Tanabe Seiyaku and Ube Industries, the latter of which discovered bepotastine. In 2001, Tanabe Seiyaku granted Senju, now owned by Allergan, exclusive worldwide rights, with the exception of certain Asian countries, to develop, manufacture and market bepotastine for ophthalmic use. Senju, in turn, has granted the United States rights for the ophthalmic preparation to ISTA Pharmaceuticals.

In 2011, ISTA pharmaceuticals experienced a 2.4% increase in net revenues from 2010, which was driven by the sales of Bepreve. Their net revenue for 2011 was $160.3 million.[4] ISTA Pharmaceuticals was acquired by Bausch & Lomb in March 2012 for $500 million.[5] Bausch & Lomb hold the patent for bepotastine besilate (https://www.accessdata.fda.gov/scripts/cder/ob/docs/temptn.cfm. On November 26, 2014, Bausch & Lomb sue Micro Labs USA for patent infringement.[6] Bausch & Lomb was recently bought out by Valeant Pharmaceuticals in May 2013 for $8.57 billion, Valeant’s largest acquisition to date, causing the company’s stock to rise 25% when the deal was announced.[7]

A Phase III clinical trial was carried out in 2010 to evaluate the effectiveness of bepotastine besilate ophthalmic solutions 1.0% and 1.5%.[8] These solutions were compared to a placebo and evaluated for their ability to reduce ocular itchiness. The study was carried out with 130 individuals and evaluated after 15 minutes, 8 hours, or 16 hours. There was a reduction in itchiness at all-time points for both ophthalmic solutions. The study concluded that bepotastine besilate ophthalmic formulations reduced ocular itchiness for at least 8 hours after dosing compared to placebo. Phase I and II trials were carried out in Japan.

Studies have been performed in animals and bepotastine besilate was not found to be teratogenic in rats during fetal development, even at 3,300 times more that typical use in humans.[3] Evidence of infertility was seen in rats at 33,000 times the typical ocular does in humans.[3] The safety and efficacy has not been established in patients under 2 years of age and has been extrapolated from adults for patients under 10 years of age.[3]

The reaction of 4-[1-(4-chlorophenyl)-1-(2-pyridyl)methoxy]piperidine (I) with ethyl 4-bromobutyrate (II) by means of K2CO3 in refluxing acetone gives the corresponding condensation product (III), which is then hydrolyzed with NaOH in ethanol/water yielding compound (IV).

A Novel Synthetic Method for Bepotastine, a Histamine H1 Receptor …