Cefuroxime Axetil is used orally for the treatment of patients with mild-to-moderate infections, caused by susceptible strains of the designated microorganisms.

Cefuroxime axetil is a second generation oral cephalosporin antibiotic. It was discovered by Glaxo now GlaxoSmithKline and introduced in 1987 as Zinnat.[1] It was approved by FDA on Dec 28, 1987.[2] It is available by GSK as Ceftin in US[3] and Ceftum in India.[4]

It is an acetoxyethyl ester prodrug of cefuroxime which is effective orally.[5] The activity depends on in vivo hydrolysis and release of cefuroxime.

Cefuroxime is chemically (6R, 7R)-3-carbamoyloxymethyl-7-[(Z)-2-(fur-2-yl)-2-methoxy-iminoacetamido] ceph-3-em-4-carboxylic acid and has the structural Formula II:

Cefuroxime axetil having the structural Formula I:

is the 1-acetoxyethyl ester of cefuroxime, a cephalosporin antibiotic with a broad spectrum of activity against gram-positive and gram negative micro-organisms.

This compound as well as many other esters of cefuroxime, are disclosed and claimed in U.S. Pat. No. 4,267,320. According to this patent, the presence of an appropriate esterifying group, such as the 1-acetoxyethyl group of cefuroxime axetil, enhances absorption of cefuroxime from the gastrointestinal tract, whereupon the esterifying group is hydrolyzed by enzymes present in the human body.

The difference in the activity of different polymorphic forms of a given drug has drawn the attention of many workers in recent years to undertake the study on polymorphism. Cefuroxime axetil is the classical example of amorphous form exhibiting higher bioavailability than the crystalline form.

U.S. Pat. No. 4,562,181 and the related U.S. Pat. Nos. 4,820,833; 4,994,567 and 5,013,833, disclose that cefuroxime axetil in amorphous form, essentially free from crystalline material and having a purity of at least 95% aside from residual solvents, has a higher bioavailability than the crystalline form while also having adequate chemical stability.

Another U.S. Pat. No. 5,063,224 discloses that crystalline R-cefuroxime axetil which is substantially free of S-isomer is readily absorbed from the stomach and gastrointestinal tract of animals and is therefore ideally suited to oral therapy of bacterial infections.

According to this patent, such selective administration of R-cefuroxime axetil results in surprisingly greater bioavailability ability of cefuroxime, and thus dramatically reduces the amount of unabsorbable cefuroxime remaining in the gut lumen, thereby diminishing adverse side effects attributable to cefuroxime.

Said process involves an additional step of preparing sodium cefuroxime, and therefore is not economical from commercial point of view.

Cefuroxime axetil is in the amorphous form and has the following structural formula: 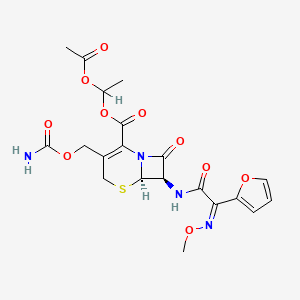 Dicyclohexylamine (17.2 g) in N,N-dimethylacetamide (50 ml) was added to a solution of cefuroxime acid (42.4 g) in N,N-dimethylacetamide (300 ml) at about −10° C. (R,S)1-Acetoxethylbromide (33.4 g) in N,N-dimethylacetamide (50 ml) was added to the above solution and the reaction mixture was stirred for 45 minutes at about −3 to 0° C. Potassium carbonate (1.1 g) was added to the reaction mixture and it was further stirred at that temperature for about 4 hours. The reaction mixture was worked up by pouring into it ethyl acetate (1.0 It), water (1.2 It) and dilute hydrochloric acid (3.5% w/w, 200 ml). The organic layer was separated and the aqueous layer was again extracted with ethyl acetate. The combined organic extracts were washed with water, dilute sodium bicarbonate solution (1%), sodium chloride solution and evaporated in vacuo to give a residue. Methanol was added to the residue and the crude product was precipitated by adding water.

The resulting precipitate was filtered off and recrystallized from the mixture of ethylacetate, methanol and hexane. The precipitated product was filtered, washed and dried to give pure crystalline cefuroxime axetil (42.5 g).

BACKGROUND OF THE INVENTION

The reaction of 3-hydroxymethyl-7- [2- (2-furyl) -2-methoxyiminoacetamido] -3-cephem-4-carboxylic acid (I) with chlorosulfonyl isocyanate (II) and then with sodium 2-ethylhexanoate gives sodium cefuroxime (III), which is then treated with 1-bromoethyl acetate (IV) in DMA.