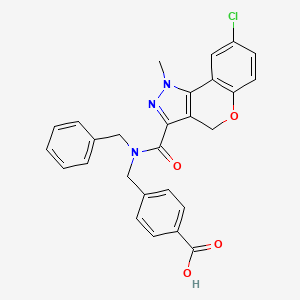 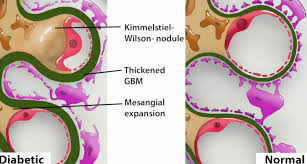 Atrasentan is an experimental drug that is being studied for the treatment of various types of cancer,[1] including non-small cell lung cancer.[2] It is also being investigated as a therapy for diabetic kidney disease.

Atrasentan failed a phase 3 trial for prostate cancer in patients unresponsive to hormone therapy.[3] A second trial confirmed this finding.[4]

It is an endothelin receptor antagonist selective for subtype A (ETA). While other drugs of this type (sitaxentan, ambrisentan) exploit the vasoconstrictive properties of endothelin and are mainly used for the treatment of pulmonary arterial hypertension, atrasentan blocks endothelin induced cell proliferation.

In April 2014, de Zeeuw et al. showed that 0.5 mg and 1.25 mg of atrasentan reduced urinary albumin by 35 and 38% respectively with modest side effects. Patients also had decreased home blood pressures (but no change in office readings) decrease total cholesterol and LDL. Patients in the 1.25 mg dose group had increased weight gain which was presumably due to increased edema and had to withdraw from the study more than the placebo or 0.5 mg dose group.[5] Reductions in proteinuria have been associated with beneficial patient outcomes in diabetic kidney disease with other interventions but is not an accepted end-point by the FDA.

Useful for treating nephropathy and chronic kidney disease associated with Type II diabetes. For a prior filing see WO2015006219 , claiming the stable solid composition in the form of a tablet comprising atrasentan and an anti-oxidant. AbbVie (following its spin-out from Abbott), is developing atrasentan (phase III; February 2015) for treating chronic kidney disease, including diabetic nephropathy.

Enantioselective Synthesis of the Pyrrolidine Core of Endothelin Antagonist ABT-627 (Atrasentan) via 1,2-Oxazines

Raney nickel (20 g), from which the water had been decanted, was treated sequentially with THF (20 mL), EXAMPLE 4 (40.82 g), and acetic acid (2.75 mL). The mixture was stirred under hydrogen (60 psi) until hydrogen uptake slowed, treated with trifluoroacetic acid, stirred under hydrogen (200 psi) until HPLC shows no residual imine and less than 2% nitrone and filtered with a methanol (100 mL) wash. The filtrate, which contained 13.3 g of EXAMPLE 5, was concentrated with THF (200 mL) addition to 100 mL, neutralized with 2N aqueous NaOH (50 mL), diluted with water (200 mL), and extracted with ethyl acetate (2×100 mL). The extract was used in the next step.

EXAMPLE 501F was concentrated with acetonitrile (100 mL) addition to 50 mL, treated with (S)-(+)-mandelic acid (2.06 g), stirred until a solution formed, stirred for 16 hours, cooled to 0° C., stirred for 5 hours and filtered. The filtrant was dried at 50° C. under a nitrogen stream for 1 day. The purity of the product was determined by chiral HPLC using Chiralpak AS with 95:5:0.05 hexane/ethanol/diethylamine, a flow rate of 1 mL/min. and UV detection at 227 nm. Retention times were 15.5 minutes for the (+)-enantiomer and 21.0 minutes for the (−)-enantiomer.

The Michael reaction between 3,4-(methylenedioxy)-beta-nitrostyrene (I) and ethyl (4-methoxybenzoyl)acetate (II) in the presence of DBU gave adduct (III) as a mixture of isomers. Hydrogenation of this nitro ketone over Raney-Ni afforded, after spontaneous cyclization of the resulting amino ketone, the pyrroline (IV). Further reduction of the imine with NaBH3CN yielded a mixture of three pyrrolidine isomers. The desired trans-trans isomer (VI) could not be separated from the cis-trans isomer by column chromatography. However, the pure cis-cis compound (V) was isomerized to (VI) with NaOEt in refluxing EtOH. The protection of the amine as the tert-butyl carbamate with Boc2O, and saponification of the ester function provided the racemic acid (VII). Resolution of (VII) was achieved by conversion to the mixed anhydride (VIII) with pivaloyl chloride, followed by condensation with the lithium salt of (S)-4-benzyl-2-oxazolidinone (IX), and chromatographic separation of the resulting diastereomeric imides. Alternatively, racemic (VII) could be resolved by crystallization of its salt with (R)-a-methylbenzylamine. Removal of the Boc group from the appropriate isomer (X) with HCl in dioxan, followed by alkylation with N,N-dibutylbromoacetamide (XI) in the presence of i-Pr2NEt furnished the pyrrolidinylacetamide (XII). Finally, hydrolysis of the imide with lithium hydroperoxide provided the target acid.

Cyclization of 5-(2-nitrovinyl)-1,3-benzodioxole (I) with ethyl 2-(4-methoxybenzoyl)acetate (II) by means of DBU in THF gives the 4-nitrobutyrate (III), which is reduced with H2 over Ni in ethanol to the corresponding amine, which undergoes immediate cyclization to give the pyrroline carboxylate (IV). Reduction of pyrroline (IV) with NaCNBH3 in THF affords the expected pyrrolidine as a mixture of the (trans,trans)-(V), (cis,cis)-(VI) and (cis,trans)-(VII) isomers. Using chromatography on silica gel, only the (cis,cis)-isomer (VI) is separated and completely isomerized to the (trans,trans)-isomer (V) by treatment with NaOEt in refluxing ethanol. Pure (trans,trans)-isomer (V) or the remaining mixture of (trans,trans)-(V) and (cis,trans)-(VII) is N-protected with Boc2O in dichloromethane to provide a mixture of carbamates. Then hydrolysis of the esters is performed with NaOH in ethanol/water at room temperature, and under these conditions only the (trans,trans)-isomer hydrolyzes, giving the racemic (trans,trans)-acid (VIII). Unreacted (cis,trans)-ester (VII) is easily removed by conventional methods. Condensation of the racemic acid (VIII) with the lithium salt of the chiral oxazolidinone (IX) by means of pivaloyl chloride yields the corresponding amide as a diastereomeric mixture of (X) and (XI) that are separated by chromatography. The desired isomer (XI) is deprotected with HCl in dioxane to afford the chiral pyrrolidine (XII), which is condensed with 2-bromo-N,N-dibutylacetamide (XIII) by means of diisopropylamine in acetonitrile to give the adduct (XIV). Finally, the chiral auxiliary of (XIV) is eliminated by means of LiOOH (LiOH + H2O2) in water.