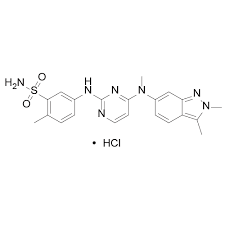 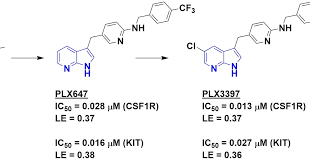 Multi-targeted receptor tyrosine kinase inhibitor of CSF1R, c-Kit, and FLT3 (IC50 values 13 nM, 27 nM, and 11 nM, respectively) Administration of PLX3397 reduced CIBP, induced substantial intratumoral fibrosis, and was also highly efficacious in reducing tumor cell growth, formation of new tumor colonies in bone, and pathological tumor-induced bone remodeling. PLX3397 is superior to imatinib in the treatment of malignant peripheral nerve sheath tumor (MPNST), and the combination of PLX3397 with a TORC1 inhibitor could provide a new therapeutic approach for the treatment of this disease. 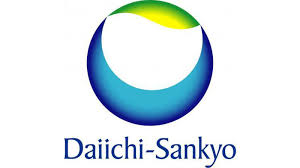 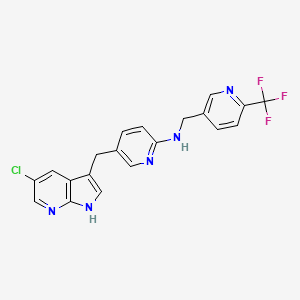 c-Fms
C-fms is a member of the family of genes originally isolated from the Susan McDonough strain ot teline sarcoma viruses, The cellular proto-oncogene FMS (c-fms, cellular feline McDonough sarcoma) codes for the receptor for the macrophage colony-stimuktmg tactor (M- CSF) C-fms is crucial for the growth and differentiation of the monocyte-macrophage lineage, and upon binding of Vf-CSF to the extracellular domain of c-fms, the receptor dimeπzes and trans- autophosphorylates cytoplasmic tyrosine residues

M-CSF, first described by Robinson and co-workers (Blood 1969, 33 396-9), is a cytokine that controls the production, differentiation, and function of macrophages M-CSF stimulates differentiation of progenitor cells to mature monocytes, and prolongs the survival of monocytes Furthermore, M-CSF enhances cytotoxicity, superoxide production, phagocytosis, chemota\is, and secondary cytokine production of additional factors in monocytes and macrophages Examples of such additional factors include granulocyte colony stimulating lactor (G-CSF) interleukin-6 (IL-6), and mterleukm-8 (IL-8) M-CSF stimulates hematopoiesis, promotes differentiation and proliferation of osteoclast progenitor cells, and has profound effects on lipid metabolism Furthermore, M-CSF is important in pregnancy Physiologically, large amounts of M-CSF are produced in the placenta, and M-CSF is believed to play an essential role in trophoblast differentiation (Motoyoshi, lnt J Hematol 1998, 67 109-22) l hc elevated semm levels of M-CSF m early pregnancy may participate in the immunologic mechanisms responsible for the maintenance of the pregnancy (Flanagan & Lader, Curr Opm Hematol 1998, 5 181-5)

Related to c-fms and c-kit are two p_latelet -derived growth factor receptors, alpha (i e , pdgfra) and beta (pdgfrb) (PDGF) 1 he gene coding for pdgfra is located on chromosome 4ql 1 -q!2 in the same region of chromosome 4 as the oncogene coding for c-kit The genes coding for pdgfra and c-fms appear to have evolved from a common ancestral gene by gene duplication, inasmuch as these two genes are tandemly linked on chromosome 5 They are oriented head to tail with the 5-pnme exon of the c-fms gene located only 500 bp from the last 3-pπme exon of the gene coding for pdgfra Most gastrointestinal stromal tumors (GIST) have activating mutations in c-kit and most patients with GISTs respond well to Gleevec, which inhibits c-kit Hemπch et al (Science 2003, 299 “OS-IO) have shown that approximately 35% of GISTs lacking c-krt mutations, have intragenic activation mutations m tht gene encoding pdgfra, and that tumors expressing c-kit or pdgfrd are indistinguishable with respect to activation of downstream signaling intermediates and cytogenetic changes associated with tumor progression Thus, c kit and pdgfra mutations appear to be alternative and mutually exclusive oncogenic mechanisms m GISTs [0007} Similarly, the observation that production of M-CSF, the major macrophage growth factor, is increased in tissues during inflammation points out a role for c-frns in diseases, such as for example inflammatory diseases. More particularly, because elevated levels of M-CSF are found in the disease state, modulation of the activity of c-fms can ameliorate disease associated with increased levels of M-CSF.

SCF is synthesized as a transmembrane protein with a molecular weight of 220 or 248 Dalton, depending on alternative splicing of the mRNA to encode exon 6. The larger protein can be proteolytically cleaved to form, a soluble, glycosylated protein which noncovalently dimerizcs. Both the soluble and membrane-bound forms of SCF can bind to and activate c-kit. For example, in the skin, SCF is predominantly expressed by fibroblasts, keratinocytes, and endothelial cells, which modulate the activity of melanocytes and mast cells expressing c-kit. In bone, marrow stromal cells express SCF and regulate hematopoiesis of c-kit expressing stem cells. In the gastrointestinal tract, intestinal epithelial cells express SCF and affect the interstitial cells of Cajal and intraepithelial lymphocytes. In the testis, Sertoli cells and granulosa cells express SCF which regulates spermatogenesis by interaction with c-kit on germ cells.

Fragments in the clinic: PLX3397

Practical Fragments covers a wide variety of journals. J. Med. Chem., Bioorg. Med. Chem. Lett., Drug Disc. Today, and ACS Med. Chem. Lett. are all well-represented, but we also range further afield, from biggies such asNature and Science to more niche titles such as ChemMedChem, Acta. Cryst. D., and Anal. Chim. Acta. The increasingly clinical relevance of fragment-based approaches is highlighted by a recent paper by William Tap and a large group of collaborators appearing in the New England Journal of Medicine. This reports on the results of the Daiichi Sankyo (née Plexxikon) drug PLX3397 in a phase I trial for tenosynovial giant-cell tumor, a rare but aggressive cancer of the tendon sheath.

The story actually starts with a 2013 paper by Chao Zhang and his Plexxikon colleagues in Proc. Nat. Acad. Sci. USA. The researchers were interested in inhibiting the enzymes CSF1R (or FMS) and KIT; both kinases are implicated in cancer as well as inflammatory diseases. The team started with 7-azaindole, the same fragment they used to discover vemurafenib. Structural studies of an early derivative, PLX070, revealed a hydrogen bond between the ligand oxygen and a conserved backbone amide. Further building led to PLX647, with good activity against both CSF1R and KIT. Selectivity profiling against a panel of 400 kinases revealed only two others with IC50values < 0.3 µM. The molecule was active in cell-based assays, had good pharmacokinetics in mice and rats, and was active in rodent models of inflammatory disease.

The new paper focuses on the results of a clinical trial with PLX3397, a derivative of PLX647. Despite its close structural similarity to PLX647, it binds to CSF1R in a slightly different manner. Both inhibitors bind to the inactive form of the kinase, but PLX3397 also recruits the so-called juxtamembrane domain of the kinase to stabilize this autoinhibited conformation. Pharmacokinetic and pharmacodynamics studies in animals were also positive.

Tenosynovial giant-cell tumor seems to be dependent on CSF1R, so the researchers performed a phase 1 dose-escalation study with an extension in which patients treated with the chosen phase 2 dose were treated longer. Of the 23 patients in this extension, 12 had a partial response and 7 had stable disease. A quick search ofclinicaltrials.gov reveals that PLX3397 is currently in multiple trials for several indications, including a phase 3 trial for giant cell tumor of the tendon sheath.

Several lessons can be drawn from these studies. First, as the authors note, one fragment can give rise to multiple different clinical candidates. Indeed, in addition to vemurafenib, 7-azaindole was also the starting point forAZD5363. This is a good counterargument to those who believe that novelty is essential in fragments.

A second, related point is that selectivity is also not necessary for a fragment. The fact that 7-azaindole comes up so frequently as a kinase-binding fragment has not prevented researchers from growing it into remarkably selective inhibitors. An obvious corollary is that even subtle changes to a molecule can have dramatic effects: the added pyridyl nitrogen in PLX3397 is essential for stabilizing a unique conformation of the enzyme.

The compound named, [5-(5-chloro-lH-pyrrolo[2,3-b]pyridin-3-ylmethyl)-pyridin-2-yl]-(6-trifluoromethyl-pyridin-3-ylmethyl)-amine, which is also known as pexidartinib, is effective for treating subjects suffering from or at risk of a c-Kit and/or c-Fms and/or Flt3 mediated disease or condition. Suitable compounds, including pexidartinib or a salt thereof, for the treatment of such diseases and conditions are disclosed in U.S. Patent 7,893,075, U.S.

There remains a need in developing new versatile and facile processes for the efficient preparation of pexidartinib and other similar molecules, especially in an industrial scale.

Step 1: Conversion of A to Ilia

[0073] Alternatively, potassium ie/ -pentoxide can also be used in this reaction as a 25% solution in toluene.

Step 2: Conversion of Ilia to IV

Step 3: Conversion of IV to I

Step 4: Conversion of I to II

[0076] The reactor was charged with compound I (10 gm, 1 eq.), 110 mL ethanol was added and the reaction mixture was stirred. Concentrated hydrochloric acid (4.7 gm, 2 eq.) was slowly added to the reaction mixture while maintaining a temperature of about 30°C or less to form a clear solution. It was then filtered and washed with methanol (10 mL). It was again filtered and purified water (3 mL) was added to it at about 28-32°C. The mixture was stirred at about 28-32°C for 1-3 hours and filtered, purified water (177 mL) was added to it at about 25-32°C. The reaction mixture was cooled at about 0-7 °C and stirred for at least about 2 hours. Optionally, seed crystals of compound II can be added in this step. The solids were filtered, rinsed with acool (0-5°C) mixture of methanol (6 mL) and MTBE (24 mL), and with cool (0-5°C) MTBE (30 mL). The product was dried to provide Compound II (90% yield).