Zibotentan (INN) (earlier code name ZD4054) is an anti-cancer candidate.[1] It is an endothelin receptor antagonist.[2]

It failed a phase III clinical trial for prostate cancer[3] but other trials are planned.[4] Tolerability of zibotentan plus docetaxel has been evaluated.[5]

Bromination of 2-amino-5-methylpyrazine (I) with Br2 in CHCl3 affords the bromopyrazine (II). Subsequent bromide displacement in (II) by means of sodium methoxide gives rise to the methoxypyrazine (III). The amino group of (III) is then protected by acylation with isobutyl chloroformate, to produce carbamate (IV). Diazotization of 3-amino-2-chloropyridine (V), followed by treatment with sulfur dioxide in the presence of CuCl furnishes sulfonyl chloride (VI). Carbamate (IV) is then acylated by means of NaH and sulfonyl chloride (VI) in DMF to furnish the N-sulfonyl carbamate (VII). Esterification of 4-carboxyphenylboronic acid (VIII) with H2SO4 in MeOH gives 4-(methoxycarbonyl)phenylboronic acid (IX). Mitsunobu coupling between boronic acid (IX) and chloropyridine (VII) furnishes adduct (X). Methyl ester (X) is converted into hydrazide (XI) by treatment with hydrazine hydrate in refluxing methanol. Then, cyclization of the acyl hydrazide (XI) with boiling triethyl orthoformate gives rise to the target oxadiazole derivative.

The endothelins are released from a range of tissue and cell sources including vascular endothelium, vascular smooth muscle, kidney, liver, uterus, airways, intestine and leukocytes. Release can be stimulated by hypoxia, shear stress, physical injury and a wide range of hormones and cytokines. Elevated endothelin levels have been found in a number of disease states in man including cancers.

Cancer affects an estimated 10 million people worldwide. This figure includes incidence, prevalence and mortality. More than 4.4 million cancer cases are reported from Asia, including 2.5 million cases from Eastern Asia, which has the highest rate of incidence in the world. By comparison, Europe has 2.8 million cases, North America 1.4 million cases, and Africa 627,000 cases. In the UK and US, for example, more than one in three people will develop cancer at some point in their life, Cancer mortality in the U.S. is estimated to account for about 600,000 a year, about one in every four deaths, second only to heart disease in percent of all deaths, and second to accidents as a cause of death of children 1-14 years of age. The estimated cancer incidence in the U.S. is now about 1,380,000 new cases annually, exclusive of about 900,000 cases of non-melanotic (basal and squamous cell) skin cancer.

Cancer is also a major cause of morbidity in the UK with nearly 260,000 new cases (excluding non-melanoma skin cancer) registered in 1997. Cancer is a disease that affects mainly older people, with 65% of cases occurring in those over 65. Since the average life expectancy in the UK has almost doubled since the mid nineteenth century, the population at risk of cancer has grown. Death rates from other causes of death, such as heart disease, have fallen in recent years while deaths from cancer have remained relatively stable. The result is that 1 in 3 people will be diagnosed with cancer during their lifetime and 1 in 4 people will die from cancer. In people under the age of 75, deaths from cancer outnumber deaths from diseases of the circulatory system, including ischaemic heart disease and stroke. In 2000, there were 151,200 deaths from cancer. Over one fifth (22 per cent) of these were from lung cancer, and a quarter (26 per cent) from cancers of the large bowel, breast and prostate.

Worldwide, the incidence and mortality rates of certain types of cancer (of stomach, breast, prostate, skin, and so on) have wide geographical differences which are attributed to racial, cultural, and especially environmental influences. There are over 200 different types of cancer but the four major types, lung, breast, prostate and colorectal, account for over half of all cases diagnosed in the UK and US. Prostate cancer is the fourth most common malignancy among men worldwide, with an estimated 400,000 new cases diagnosed annually, accounting for 3.9 percent of all new cancer cases. Current options for treating cancers include surgical resection, external beam radiation therapy and / or systemic chemotherapy. These are partially successful in some forms of cancer, but are not successful in others. There is a clear need for new therapeutic treatments. Compound (I) is exemplified and described in WO96/40681 as Example 36. WO96/40681 claims the endothelin receptors described therein for the treatment of cardiovascular diseases. The use of Compound (I) in the treatment of cancers and pain is described in WO04/018044. Compound (I) has the following structure:

In WO04/018044 an endothelin human receptor binding assay is described. The pICjo (negative log of the concentration of compound required to displace 50% of the ligand) for Compound (I) at the ETA receptor was 8.27 [8.23 – 8.32] (n=4). Compound (I) is thus an excellent endothelin antagonist. 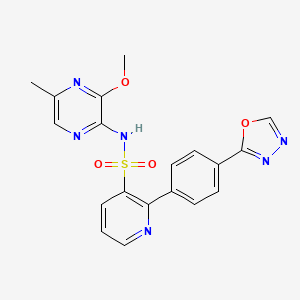