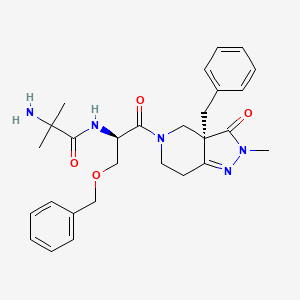 Capromorelin (CP-424,391) is an investigational medication developed by the Pfizer drug company.[2] [3] It functions as a growth hormone secretagogue and ghrelin mimetic which causes the body to secrete human growth hormone in a way usually seen at puberty and in young adulthood. Initial studies have shown the drug to directly raise insulin growth factor 1 (IGF-1) and growth hormone levels.[4]

The drug is being considered for its therapeutic value in aging adults because elderly people have much lower levels of growth hormone and less lean muscle mass, which can result in weakness and frailty.[5]

In a one-year treatment trial (starting 1999) with 395 seniors between 65 and 84 years old, patients who received the drug gained an average of 3 lb (1.4 kg) in lean body mass in the first six months and also were better able to walk in a straight line in a test of balance, strength and coordination. After 12 months, patients receiving capromorelin also had an improved ability to climb stairs, however the results were not good enough to continue the trial for the 2nd planned year.[6]

Capromorelin, however, has not been approved by major regulatory bodies such as the World Health Organization, the European Medicines Agency or the United States FDA. In the U.S. at least, approval is not expected to be forthcoming any time soon, because the FDA does not consider aging a disease, and so requires extraordinary evidence of benefit and non-toxicity to approve a drug for use as an anti-aging agent.[7]

Ghrelin is a peptide that promotes a growth hormone secreted by the stomach and exhibits a variety of physiological effects, including the promotion of appetite, gastrointestinal tract motility and stomach acid secretion, as well as improved heart function. Capromorelin (RQ-00000005) is a ghrelin receptor agonist and, because it has been shown to increase body weight without increasing body fat and to improve motility and appetite in the elderly, it has the potential for many uses, including frailty and GERD.

The intermediate dipeptide (VI) was prepared by two similar ways. Treatment of N-Boc-O-benzyl-D-serine (I) with MeI and K2CO3 produced the methyl ester (II). Subsequent deprotection of the Boc group of (II) with trifluoroacetic acid gave aminoester (III), which was coupled with N-Boc-alpha-methylalanine (IV) using EDC and HOBt yielding (V). Hydrolysis of the resulting dipeptide ester (V) then provided intermediate (VI). In an alternative procedure, N-Boc-alpha-methyl alanine (IV) was activated as the N-hydroxysuccinimidyl ester (VII), which was condensed with O-benzyl-D-serine (VIII) to produce dipeptide (VI).

Methyl 4-oxopiperidine-3-carboxylate (IX) was protected as the tert-butyl carbamate (X) with Boc2O. This was alkylated with benzyl bromide in the presence of NaH to provide the racemic benzyl derivative (XI). Subsequent cyclization of (XI) with methylhydrazine produced the pyrazolopyridine (XII), which was deprotected with trifluoroacetic acid. The resulting amine (XIII) was then coupled with dipeptide (VI) using EDC and HOBt to afford the diastereomeric amides (XIV). After chromatographic isolation of the (R,R)-diastereoisomer, acid deprotection of the Boc group furnished the title compound.

By DR ANTHONY MELVIN CRASTO Ph.D in Phase2 drugs, Uncategorized on May 16, 2014.
← MY PROFILE ON LINKEDIN India business robust in terms of growth: Glenmark….videos →