Astellas’ Dificlir (fidaxomicin) could save NHS thousands of pounds

Using Astellas’ Dificlir (fidaxomicin) as a first-line treatment for clostridium difficile infection (CDI) is not only clinically effective but could also save the National Health Service thousands of pounds compared to the standard of care, according to data from a late-stage study

Fidaxomicin (trade names Dificid, Dificlir, and previously OPT-80 and PAR-101) is the first in a new class of narrow spectrummacrocyclic antibiotic drugs.[2] It is a fermentation product obtained from the actinomycete Dactylosporangium aurantiacum subspecies hamdenesis.[3][4] Fidaxomicin is non-systemic, meaning it is minimally absorbed into the bloodstream, it is bactericidal, and it has demonstrated selective eradication of pathogenic Clostridium difficile with minimal disruption to the multiple species ofbacteria that make up the normal, healthy intestinal flora. The maintenance of normal physiological conditions in the colon can reduce the probability of Clostridium difficile infection recurrence.[5] [6]

It is marketed by Cubist Pharmaceuticals after acquisition of its the originating company Optimer Pharmaceuticals. The target use is for treatment of Clostridium difficile infection. Fidaxomicin is available in a 200 mg tablet that is administered every 12 hours for a recommended duration of 10 days. Total duration of therapy should be determined by the patient’s clinical status. It is currently one of the most expensive antibiotics approved for use. A 20 tab pack costs upwards of £1350.[7] 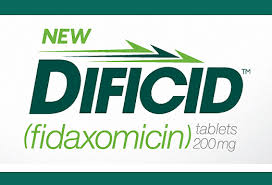 For the treatment of CDAD (Clostridium difficile-Associated diarrhea), the drug won an FDA advisory panel’s unanimous approval on April 5, 2011.[14] and full FDA approval on May 27, 2011.[15]

Good results were reported in 2009 from a North American phase III trial comparing it with oral vancomycin for the treatment ofClostridium difficile infection (CDI)[9][10] The study met its primary endpoint of clinical cure, showing that fidaxomicin was non-inferior to oral vancomycin (92.1% vs. 89.8%). In addition, the study met its secondary endpoint of recurrence: 13.3% of the subjects had a recurrence with fidaxomicin vs. 24.0% with oral vancomycin. The study also met its exploratory endpoint of global cure (77.7% for fidaxomicin vs. 67.1% for vancomycin).[11] Clinical cure was defined as patients requiring no further CDI therapy two days after completion of study medication. Global cure was defined as patients who were cured at the end of therapy and did not have a recurrence in the next 4 weeks.[12]

Fidaxomicin was shown to be as good as the current standard-of-care, vancomycin, for treating CDI in a Phase III trial published in February 2011.[13] The authors also reported significantly fewer recurrences of infection, a frequent problem with C. difficile, and similar drug side effects.