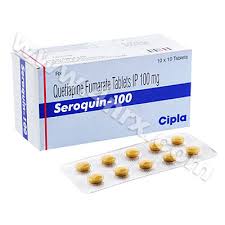 Quetiapine (/kwɨˈtaɪ.əpiːn/ kwi-ty-ə-peen) (branded as Seroquel, Xeroquel, Ketipinor) is a short-acting atypical antipsychotic approved for the treatment of schizophrenia, bipolar disorder, and along with an antidepressant to treat major depressive disorder.

Annual sales are approximately $5.7 billion worldwide, with $2.9 billion in the United States. The U.S. patent, which  expiredv in 2011, received a pediatric exclusivity extension which pushed its expiration to March 26, 2012.The patent has already expired in Canada. Quetiapine was developed by AstraZeneca from 1992-1996 as an improvement from first generation antipsychotics. It was first approved by the FDA in 1997. There are now several generic versions of quetiapine, such as Quepin, Syquel and Ketipinor

Seroquel (quetiapine) is a psychotropic medication that is used to treat schizophrenia in adults and children who are at least 13 years old. Seroquel is also used in the treatment of major depression and bipolar disorder. Side effects of Seroquel may include mood or behavior changes, constipation, drowsiness, headache, and trouble sleeping. Older adults with dementia may have a slightly increased risk of death when taking this medication.

Dosing preparations are 25, 50, 100, 200, 300, and 400 mg tablets. Seroquel may interact with a number of other drugs, including, but not limited to, antidepressant medications, antifungal drugs, steroids, cimetidine (Tagamet), thioridazine (Mellaril), and lorazepam (Ativan). During pregnancy, this medication should be used only when clearly needed. Discuss the risks and benefits with your doctor. Seroquel passes into breast milk and may have undesirable effects on a nursing infant.

Quetiapine fumarate is a psychotropic agent belonging to a chemical class of dibenzothiazepine derivatives, designated chemically as 2-[2-(4-dibenzo [b,f] [l,4]thiazepin -1 l-yl-l-piperazinyl)ethoxy]-ethanol fumarate (2: l )(salt). Its molecular formula is C42H5oN604S2*C4H404 having a molecular weight of 883.1 1. The structural formula is:

Quetiapine is marketed as immediate release as well as extended release tablets in United States under the trade name Seroquel® and Seroquel XR® by AstraZeneca.

US patent 5,948,437 discloses sustained release formulations of quetiapine using gelling agents such as hydroxypropyl methylcellulose and its derivatives that create a gel structure after contact with water. US patent 4,547,57 1 describes process for the preparation of carboxymethyl ethyl cellulose (CMEC) polymer.

WO 2005041935 discloses matrix composition comprising quetiapine and a wax material.

WO 2007086079 discloses sustained release compositions of quetiapinecomprising a channelizer and a rate controlling polymer.

WO 20091 13051 discloses sustained release compositions containingquetiapine and one or more non-gelling and/or waxy excipients.

WO 2010001413 discloses sustained release dosage forms comprisingquetiapine or its pharmaceutically acceptable salts and one or more non-gellable release controlling polymers.

WO 2010028794 discloses a matrix formulation in the form of a retard tablet comprising quetiapine, at least one matrix-forming, water-insoluble, non-swellable auxiliary agent, and at least one water-soluble binding agent.

The synthesis of quetiapine begins with a dibenzothiazepinone. The lactam is first treated with phosphoryl chloride to produce a dibenzothiazepine. A nucleophilic substitutionis used to introduce the sidechain.U.S. Patent 4,879,288.

The route of the compound 4 is not stable enough, then there are improved route. 6 and the reaction of phenyl chloroformate 7 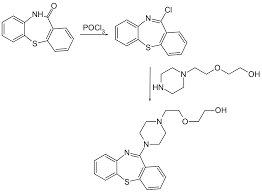 Quetiapine fumarate, Bis [2-(2-[4-(dibenzo[b,f][1,4]thiazepin-11-yl]ethoxy)ethanol] fumarate (IUPAC)2-[2-(4-dibenzo[b,f][1,4]thiazepin-11-yl-1-piperazinyl)ethoxy]-ethanol-(E)-2-butanedioate (2:1) salt), [ICI 204,636], is a novel dibenzothiazepine antipsychotic developed by Zeneca. It is marketed under the trade name ‘Seroquel’Seroquel. Quetiapine is well tolerated and clinically effective in the treatment of schizophrenia.

The initial hope of investigators was that quetiapine would have antipsychotic potential and that it might share some of the properties of clozapine without its toxicity to white blood cells.

The effective dosage range is usually 300-450 mg/day split into two doses. The dose is titrated upwards from 25 mg twice dailybd from day one to 300mg/daya fuller dosage on day 4. Elderly patients or patients with liver problems should be started on lower doses. It is both superior to placebo and, and comparable to haloperidol in reducing positive symptoms at doses ranging from 150 to 750 mg/day and is an effective treatment for in reducing negative symptoms at a dose of 300 mg/day.

Somnolence is the most common adverse event. Abnormalities of the QTqt interval on ECG appear very infrequently and there is no need for a baseline ECG or blood pressure monitoring as used to be the case with ssertindole. There is no need for haematological monitoring as with clozapine. Quetiapine, across the full dosage range, is associated with no greater extrapyramidal symptoms than placeboThere is a reduced potential for extrapyramidal symptoms compared with conventional antipsychotics.

Quetiapine’s general efficacy and side effect profile suggest that, unless there are unforeseen post-marketing complications, quetiapine deserves a major place in the initial and long term management of schizophreniform disorders.

Quetiapine fumarate, Bis [2-(2-[4-(dibenzo[b,f][1,4]thiazepin-11-yl]ethoxy)ethanol] fumarate (IUPAC) 2-[2-(4-dibenzo[b,f][1,4]thiazepin-11-yl-1-piperazinyl)ethoxy]-ethanol-(E)-2-butanedioate (2:1) salt), [ICI 204,636], is a novel dibenzothiazepine antipsychotic developed by Zeneca Pharmaceuticals. It is marketed under the trade name ‘Seroquel’. Quetiapine is well tolerated and clinically effective in the treatment of schizophrenia.