RALEIGH, N.C., Oct. 9, 2013 /PRNewswire/ — BioDelivery Sciences International, Inc. announced today that its New Drug Application (NDA) for Bunavail (buprenorphine naloxone buccal film) for the maintenance treatment of opioid dependence has been accepted for filing by the U.S. Food and Drug Administration (FDA), indicating that the application is sufficiently complete to permit a substantive review. Based on timelines established by the Prescription Drug User Fee Act (PDUFA), the review of the Bunavail NDA is expected to be completed by early June 2014.

Buprenorphine is a semi-synthetic opioid that is used to treat opioid addiction in higher dosages (>2 mg), to control moderate acute pain in non-opioid-tolerant individuals in lower dosages (~200 µg), and to control moderate chronic pain in dosages ranging from 20–70 µg/hour. It is available in a variety of formulations: Subutex, Suboxone, Zubsolv (buprenorphine HCl and naloxone HCl; typically used for opioid addiction), Temgesic (sublingual tablets for moderate to severe pain), Buprenex (solutions for injection often used for acute pain in primary-care settings), Norspan and Butrans (transdermal preparations used for chronic pain).

Buprenorphine hydrochloride was first marketed in the 1980s by Reckitt & Colman (now Reckitt Benckiser) as an analgesic, generally available as Temgesic 0.2 mg sublingual tablets, and as Buprenex in a 0.3 mg/mL injectable formulation. In October 2002, the Food and Drug Administration (FDA) of the United States also approved Suboxone and Subutex, buprenorphine’s high-dose sublingual tablet preparations indicated for detoxification and long-term replacement therapy in opioid dependency, and the drug is now used predominantly for this purpose.

In the European Union, Suboxone and Subutex, buprenorphine’s high-dose sublingual tablet preparations, were approved for opioid addiction treatment in September 2006.[3] In the Netherlands, buprenorphine is a List II drug of the Opium Law, though special rules and guidelines apply to its prescription and dispensation. In the United States, it was rescheduled to Schedule III drug from Schedule V just before FDA approval of Suboxone and Subutex.[4] In recent years, buprenorphine has been introduced in most European countries as a transdermal formulation for the treatment of chronic pain.

Subutex and Suboxone are available in 2 mg and 8 mg sublingual dosages. (Suboxone Film is also available in doses of 4 mg/1 mg & 12 mg/3 mg buprenorphine/naloxone respectively). On October 8, 2009, Roxane Laboratories of Columbus, Ohio, United States won FDA approval for a generic preparation of Subutex[6] and as of October 23, 2009, announced that it is ready for distribution nationwide in 2 mg and 8 mg sublingual dosages. The demand for this generic was so high that Roxane did not produce enough to meet market demand, resulting in pharmacies running out and being unable to order more.[7] Teva Pharmaceutical Laboratories of Tel Aviv, Israel also received approval (as of April 1, 2010) for a generic formulation of Subutex sublingual tablets in 2 mg and 8 mg dosages that are currently available in limited distribution in America as of June 20, 2010. In 2013, Reckitt Benckiser voluntarily discontinued the sale of Suboxone tablets in the United States based on data from Poison control centers that consistently found significantly higher rates (7.8–8.5 times greater) of accidental pediatric exposure with Suboxone tablets as compared with Suboxone Film.[8]

Since 2001, buprenorphine is also available transdermally as 35, 52.5, and 70 µg/h transdermal patches that deliver the dose over 96 hours. This dosage form is marketed as Transtec in most European countries by Grunenthal (Napp Pharmaceuticals in the UK,[9][10] Norpharma in Denmark) for the treatment of moderate to severe cancer pain and severe non-cancer pain not responding to non-opioids.

Other available buprenorphine formulations include a 5, 10, and 20 µg/h, 7-day patch, marketed as Butrans in the U.S. by Purdue Pharma (and by Napp Pharmaceuticals in the UK) indicated for the management of moderate to severe chronic pain in patients requiring a continuous, around-the-clock opioid analgesic for an extended period of time.[11] A similar transdermal system is marketed by a collaboration between Mundipharma and Grunenthal in Australia under the name Norspan, with indications for moderate chronic pain not responding to non-opioids, dosed in 5, 10, or 20 µg/h patches.[12]

A novel implantable formulation of buprenorphine (Probuphine), using a polymer matrix sustained-release technology, has been developed to offer treatment for opioid dependence while minimizing risks of patient noncompliance and illicit diversion. FDA requested additional information about Probuphine on April 30, 2013, in a complete response letter to Titan Pharmaceuticals pending NDA.[16]

In addition to the sublingual tablet, Suboxone is now marketed in the form of a sublingual film, available in the 2 mg/0.5 mg, 4 mg/1 mg, 8 mg/2 mg, and recently 12 mg/3 mg dosages; the film is not available in Canada or the United Kingdom (where it was discovered). The makers of Suboxone, Reckitt Benckiser, claim that the film has some advantages over the traditional tablet in that it dissolves faster and, unlike the tablet, adheres to the oral mucosa under the tongue, preventing it from being swallowed or falling out; that patients favor its taste over the tablet, stating that “more than 71% of patients scored the taste as neutral or better”; that each film strip is individually wrapped in a compact unit-dose pouch that is child-resistant and easy to carry; and that it is clinically interchangeable with the Suboxone tablet and can also be dosed once daily.[17] Reckitt Benckiser also states that the film discourages misuse and abuse, as the paper-thin film is more difficult to crush and snort. Also, a ten-digit code is printed on each pouch, which helps facilitate medication counts and, therefore, serves to deter diversion into the illegal drug market. Although Suboxone film may deter snorting the drug it makes injecting the drug much easier as the films are extremely easy to dissolve in water making for easy injection and the fact that the naloxone in suboxone is ineffective at blocking the effects of buprenorphine when injected by addicts not dependent on another opioid.

Buprenorphine is a semi-synthetic derivative of thebaine, one of the most chemically reactive opium alkaloids. Buprenorphine has a molecular weight of 467 and its structure is typically opioid with the inclusion of a C-7 side-chain containing a t-butyl group. This group confers overall lipophilicity on the molecule which has an important influence on its pharmacology.

Opioids exert their pharmacological effects by binding to opioid receptors. The pharmacological effects are determined by the nature of opioid-receptor interaction. Some of these effects such as analgesia, mediated by an agonistic action at the μ-opioid receptor are desirable, whereas others such as nausea, sedation, or constipation can be considered as unwanted adverse effects. Buprenorphine is a μ-opioid receptor agonist with high affinity, but low intrinsic activity. Compared with morphine (a full μ-opioid agonist) buprenorphine is considered a partial μ-opioid agonist displaying high affinity for and slow dissociation from the μ-opioid receptor. A full dose-dependent effect on analgesia has been seen within the clinically relevant dose range (up to 10 mg), but no respiratory depression which levels off at higher doses (Dahan et al. 2005). Clinically, there is also a less marked effect of buprenorphine-binding to μ-opioid receptors on gastrointestinal transit times, and indeed constipation seen in the clinic is remarkably low (Griessinger et al. 2005). Buprenorphine also shows partial agonistic activity at the opioid receptor-like receptor 1 (ORL1)-receptors which are (at least at supraspinal receptors) postulated to induce a pronociceptive effect. A study by Lutfy et al. (2003) reported that co-activation of ORL1-receptors compromises the antinociception induced by activation of the μ-opioid receptor. ORL1-activation has also an effect on hyperalgesia. It might be that buprenorphine’s partial agonism reduces this effect compared with full ORL1-agonists such as morphine or fentanyl. Buprenorphine’s antagonistic action at the δ-receptors which have a marked anti-opioid action and seem to negatively modulate central analgesia seems further to contribute to its clinically seen analgesic effect. Its likewise antagonistic activity at the κ-opioid receptors might explain the fact that it induces much less sedation and psychotomimetic effects than morphine or fentanyl (Lewis 1985; Leander 1988). Animal studies have shown that buprenorphine has a 20–40 times higher potency than morphine (Martin et al. 1976).

The strong binding of buprenorphine to the μ-opioid receptor has several consequences. Initial binding is relatively slow compared with other opioids such as fentanyl (Boas and Villiger 1985). However, the onset of analgesia is not dissimilar, since buprenorphine achieves effective analgesia at relatively low receptor occupancy (5%–10%) (Tyers 1980) and thus relatively low plasma concentrations of buprenorphine are sufficient to provide effective pain relief. The slow dissociation of buprenorphine from the receptor results in a long duration of effect and also confers another advantage in that when the drug is withdrawn an abstinence syndrome is rarely seen because of the long time taken for the drug to come off the receptor (Bickel et al. 1988). 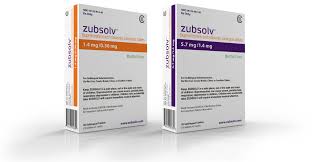 Regulators in the USA have given the green light to Orexo of Sweden’s Zubsolv as a treatment for opioid addiction.

The US Food and Drug Administration has approved Zubsolv, a once-daily sublingual formulation of Reckitt Benckiser’s Suboxone (buprenorphine/naloxone) which currently dominates the market. It is indicated for use as maintenance treatment for people suffering from opioid dependence and should be used as part of a complete treatment plan to include counselling and psychosocial support