A PDE4 inhibitor potentially for the treatment of fungal infection.

AN-2898, a novel topical anti-inflammatory compound that inhibits phosphodiesterase 4 and 7 enzyme activit

AN2898 (5-(3,4-dicyanophenoxy)-1-hydroxy -1,3-dihydro-2,1-benzoxaborole)  is a broad spectrum anti-inflammatory compound currently in development for the topical treatment of plaque and atopic psoriasis.

Further, AN2898 was also found to inhibit IL-23 release (IC50 1.0 μM) from THP-1 cells stimulated by LPS and IFN-γ. Investigation of the structure-activity relation-ship around this compound was reported to identify a more potent dual TNF-α/IL-23 inhibitor

1 Structure-activity studies led to the discovery of AN2898 in development for topical treatment of psoriasis and atopic dermatitis, J Am Acad Dermatol 2009, 60(3, Suppl. 1): Abst P1317

Onychomycosis is a disease of the nail caused by yeast, dermatophytes, or other molds, and represents approximately 50% of all nail disorders. Toenail infection accounts for approximately 80% of onychomycosis incidence, while fingernails are affected in about 20% of the cases. Dermatophytes are the most frequent cause of nail plate invasion, particularly in toenail onychomycosis. Onychomycosis caused by a dermatophyte is termed Tinea unguium. Trichophyton rubrum is by far the most frequently isolated dermatophyte, followed by T. mentagrophytes. Distal subungual onychomycosis is the most common presentation of tinea unguium, with the main site of entry through the hyponychium (the thickened epidermis underneath the free distal end of a nail) progressing in time to involve the nail bed and the nail plate. Discoloration, onycholysis, and accumulation of subungual debris and nail plate dystrophy characterize the disease. The disease adversely affects the quality of life of its victims, with subject complaints ranging from unsightly nails and discomfort with footwear, to more serious complications including secondary bacterial infections.

Many methods are known for the treatment of fungal infections, including the oral and topical use of antibiotics (e.g., nystatin and amphotericin B), imidazole anti-fungal agents such as miconazole, clotrimazole, fluconazole, econazole and sulconazole, and non-imidazole fungal agents such as the allylamine derivatives terbinafme and naftifϊne, and the benzylamine butenafine.  However, onychomycosis has proven to be resistant to most treatments. Nail fungal infections reside in an area difficult to access by conventional topical treatment and anti-fungal drugs cannot readily penetrate the nail plate to reach the infection sites under the nail. Therefore, onychomycosis has traditionally been treated by oral administration of anti-fungal drugs; however, clearly this is undesirable due to the potential for side effects of such drugs, in particular those caused by the more potent anti-fungal drugs such as itraconazole and ketoconazole. An alternative method of treatment of onychomycosis is by removal of the nail before treating with a topically active anti-fungal agent; such a method of treatment is equally undesirable. Systemic antimycotic agents require prolonged use and have the potential for significant side effects. Topical agents have usually been of little benefit, primarily because of poor penetration of the anti-fungal agents into and through the nail mass.

Reduction of 2-bromo-5-chlorobenzoic acid with BH3/THF in THF gives 2-bromo-5-chlorobenzyl alcohol , which is protected as the methoxymethyl derivative  by treatment with MOM-Cl in the presence of DIEA in CH2Cl2. Metalation and boronylation of aryl bromide either with t-BuLi or BuLi (1,2,3,4) and (i-PrO)3B (4) or B(OMe)3  in THF affords the title compound .

Alternatively, reaction of 3-chlorobenzaldehyde  with p-toluenesulfonylhydrazide in MeOH provides tosyl hydrazone  which undergoes thermal decomposition in the presence of BBr3 and catalytic FeCl3 in refluxing CH2Cl2, followed by heating with aqueous NaOH to produce the title oxaborole compound .

Aldrich) in methylated spirits (40 ml) was added slowly at below 10°C to a stirred suspension of p-toluene-sulphonylhydrazide (20.7 parts;

0.108M) in methylated spirits (150 ml). The reaction mass was then stirred at 20 to 25°C for 1 hour and then heated at 60-70°C for 1M hours when the reactants and products dissolved. The solvent was then removed by rotary evaporation and the product was obtained as a solid which was slurried with ether and washed with n-hexane. Yield = 27.2 parts (81.5% theory) mpt 122-3°C. Elemental analysis

Analytical data for exemplary compounds of structure I are provided below.

Step 1 : Preparation of (2-bromo-5-chloro-phenyl)methanol (A)

A solution of borane-tetrahydrofuran complex in THF (0.15 L, 1.5 eq) was added dropwise to a solution of 2-bromo-5-chlorobenzoic acid (24 g) in anhydrous tetrahydrofuran (0.24 L) at 0°C and under argon atmosphere. The reaction mixture was stirred at room temperature for 16 h, before being slowly poured onto 0.10 L of a 2N aqueous solution of hydrogen chloride at 0°C. The mixture was stirred for 15 minutes and the volatiles were removed under reduced pressure. The aqueous layer was extracted with ethyl acetate and the combined organic layers were washed with a IN aqueous solution of sodium hydroxide and then water. After drying over sodium sulfate, filtration and concentration under reduced pressure, the crude product was purified by column chromatography; 23.2 g; M.p. 79-80 °C.

Step 2: Preparation of l-bromo-4-chloro-2-(methoxymethoxymethyl)benzene (B)

(2-bromo-5-chloro-phenyl)methanol (A, 12 g) was dissolved in dichloromethane (0.35 mL) and cooled to 0 °C. Under argon atmosphere, diisopropylethylamine (14 mL, 1.5 eq) and chloromethyl methyl ether (5.0 mL, 1.2 eq) were added. After 1 night of stirring at room temperature, the crude reaction mixture was washed with a saturated solution of sodium hydrogen carbonate, dried over sodium sulfate and evaporated under reduced pressure. Purification by column chromatography afforded 10.5 g of l-bromo-4-chloro-2- (methoxymethoxymethyl)benzene (B) as an oil.

To a solution of (B) (6.0 g) in anhydrous tetrahydrofuran (120 mL) at -78°C was added dropwise a solution of butyllithium in hexane (15.6 mL, 1.1 eq). To the resulting yellow- brown solution trimethyl borate (2.5 mL, 1.0 eq) was injected in one portion and the cooling bath was removed. The mixture was warmed gradually for 30 minutes. After stirring at room temperature for 2 hours, 8.0 ml of a 6N aqueous solution of hydrogen chloride were added and the reaction mixture was left stirring overnight at room temperature. Evaporation of the volatiles gave a residue which was taken up in ethyl acetate, washed with water, brine, dried over sodium sulfate and then evaporated. The crude product was crystallized from ethyl acetate to give 1.4 g of 5-chloro-l-hydroxy-3H-2,l-benzoxaborole (1) as a white powder. Purification of the filtrate by column chromatography afforded 1.2 g more of 1. M.p. 147- 149 °C.

1-Hydroxy-dihydrobenzoxaboroles, such as Cl, were synthesized as shown in Scheme 1. The protected o-bromobenzyl alcohol derivative (18), prepared from 16 or 17, was converted into the corresponding phenyl boronic acid. Deprotection of the methoxymethyl ether using hydrochloric acid followed by spontaneous cyclization gave the target compounds.

do not miss out 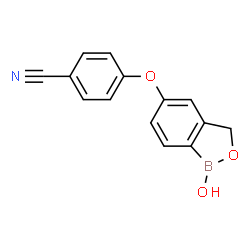 Treatment for Inflammatory Skin Diseases, including Atopic Dermatitis and Psoriasis

In phase 3  for treatment of mild to moderate atopic dermatitis……Anacor Pharmaceuticals, Inc.

Psoriasis is a chronic skin disorder caused by inflammatory cell infiltration into the dermis and epidermis, and is accompanied by keratinocyte hyperproliferation. Once triggered, a strong T-cell response is mounted, and a cascade of cytokine and chemokine production is induced.

Down-regulation of certain cytokines and chemokines is considered to be a good approach to treatment, and indeed, the biologics targeting TNF-α demonstrate the effectiveness of this approach.However, biologics have intrinsic challenges, such as limited administration route, side effects, quality control and production cost.

A novel boron-containing small molecule, Crisaborole inhibits the release of pro-inflammatory cytokines including TNF-alpha, IL-12, and IL-23, known mediators of the inflammation associated with psoriasis.

CKICK ON IMAGE FOR CLEAR VIEW

Discovery and structure-activity study of a novel benzoxaborole anti-inflammatory agent (AN2728) for the potential topical treatment of psoriasis and atopic dermatitis
Bioorg Med Chem Lett 2009, 19(8): 2129

A series of phenoxy benzoxaboroles were synthesized and screened for their inhibitory activity against PDE4 and cytokine release. 5-(4-Cyanophenoxy)-2,3-dihydro-1-hydroxy-2,1-benzoxaborole (AN2728) showed potent activity both in vitro and in vivo. This compound is now in clinical development for the topical treatment of psoriasis and being pursued for the topical treatment of atopic dermatitis

do not miss out