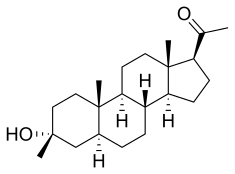 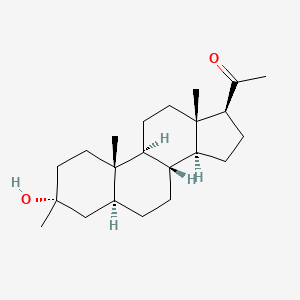 Ganaxolone was approved for medical use in the United States in March 2022.[1]

Ganaxolone is the 3β-methylated synthetic analog of allopregnanolone; it belongs to a class of compounds referred to as neurosteroids. Ganaxolone is an allosteric modulator of GABAA receptors acting through binding sites which are distinct from the benzodiazepine binding site. It has activity in a broad range of animal models of epilepsy. Ganaxolone has been shown to be well tolerated in adults and children. In early phase II studies, Ganaxolone has been shown to have activity in adult patients with partial-onset seizures and epileptic children with history of infantile spasms. It is currently undergoing further development in infants with newly diagnosed infantile spasms, in women with catamenial epilepsy, and in adults with refractory partial-onset seizures.

Ganaxolone was originally developed by CoCensys (aquired by Purdue Pharma). In 2003, Marinus Pharmaceuticals obtained the compound from Purdue Pharma.

In 2015, it was granted as orphan drug designation for the treatment of PCDH19 female epilepsy.

In an embodiment, the disclosure provides a method for using pregnenolone to make 21-OH ganaxolone and other intermediary compounds which are useful for preparing neurosteroid derivatives. The method of making 21-OH ganaxolone is shown below in Route 1.

To a solution of the above epoxide (1.5 g, 4.56 mmol) in 15 mL of THF and 15 mL of MeOH were added Nal (1.02 g, 1.5 eq.) and HO Ac (0.6 mL, 2.2 eq.). The resulting mixture was heated at 65°C for 2h. After TLC indicated that the epoxy was completely converted to an iodo compound, it was cooled to RT. Sodium acetate (1.02 g, 2.7 eq.) and 150 mg of 10% Pd/C were added and the mixture was transferred to a hydrogenation bottle with the aid of MeOH (10 mL) and was hydrogenated under 50 psi hydrogen over the weekend. It was filtered throughCelite ® and the filtrate was concentrated. The residue was then partitioned between dichloromethane and water. The aqueous solution was extracted twice with CH 2 Cl 2 and the combined organic layers were washed with brine, dried over Na 2 SO 4 and concentrated. The Biotage flash purification with 10-35% EtOAc in hexane to give 0.5 g of the desired product (33%).

Two naturally occurring metabolites of progesterone, 3α-hydroxy-5α- and 5β-pregnan-20-one (1 and 2), are potent allosteric modulators of the GABAA receptor. Their therapeutic potential as anxiolytics, anticonvulsants, and sedative/hypnotics is limited by rapid metabolism. To avoid these shortcomings, a series of 3β-substituted derivatives of 1 and 2 was prepared. Small lipophilic groups generally maintain potency in both the 5α- and 5β-series as determined by inhibition of [35S]TBPS binding. In the 5α-series, 3β-ethyl, -propyl, -trifluoromethyl and -(benzyloxy)methyl, as well as substituents of the form 3β-XCH2, where X is Cl, Br, or I or contains unsaturation, show limited efficacy in inhibiting [35S]TBPS binding. In the 5β-series, the unsubstituted parent 2 is a two-component inhibitor, whereas all of the 3β-substituted derivatives of 2 inhibit TBPS via a single class of binding sites. In addition, all of the 3-substituted 5β-sterols tested are full inhibitors of [35S]TBPS binding. Electrophysiological measurements using α1β2γ2L receptors expressed in oocytes show that 3β-methyl- and 3β-(azidomethyl)-3α-hydroxy-5α-pregnan-20-one (6 and 22, respectively) are potent full efficacy modulators and that 3α-hydroxy-3β-(trifluoromethyl)-5α-pregnan-20-one (24) is a low-efficacy modulator, confirming the results obtained from [35S]TBPS binding. These results indicate that modification of the 3β-position in 1 and 2 maintains activity at the neuroactive steroid site on the GABAA receptor. In animal studies, compound 6 (CCD 1042) is an orally active anticonvulsant, while the naturally occurring progesterone metabolites 1 and 2 are inactive when administered orally, suggesting that 3β-substitution slows metabolism of the 3-hydroxyl, resulting in orally bioavailable steroid modulators of the GABAA receptor.

Addition of the sulfur ylide generated from trimethylsulfoxonium iodide and NaH to the 20-ethylene ketal of pregnane-3,20-dione (I) furnished the spiro oxirane derivative (II). This was reduced to the tertiary alcohol (III) by means of LiAlH4 in refluxing THF. Then, acid hydrolysis of the ethylene ketal function of (III) provided the title compound. Alternatively, the intermediate ketal (III) was prepared by addition of methylmagnesium bromide to ketone (I), followed by chromatographic separation of the resultant mixture of 3-alpha and 3-beta methyl adducts.

Starting from the unprotected diketone (IV), selective addition of dimethyloxosulfonium methylide to the 3 keto group furnished oxirane (V). This was then reduced to the title alcohol by treatment with tributylstannyl hydride and AIBN.

Regioselective addition of dimethylsulfoxonium methylide to 5-alpha-pregnane-3,20-dione (I) gave the epoxide (II). Opening of the epoxide ring of (II) with sodium methoxide produced the hydroxy ether (III). Bromination of (III) with Br2 in the presence of a catalytic amount of HBr afforded bromo ketone (IV). This was then condensed with imidazole (V) in refluxing acetonitrile to furnish the title compound.

Regioselective addition of dimethylsulfoxonium methylide to 5-alpha-pregnane-3,20-dione (I) gave the epoxide (II). Opening of the epoxide ring of (II) with sodium methoxide produced the hydroxy ether (III). Bromination of (III) with Br2 in the presence of a catalytic amount of HBr afforded bromo ketone (IV). This was then condensed with 6-hydroxyquinoline (V) in the presence of potassium tert-butoxide to furnish the quinolinyl ether (VI). The quinoline ring was then oxidized with m-chloroperbenzoic acid, yielding the title N-oxide.

AS ON DEC2021 3,491,869 VIEWS ON BLOG WORLDREACH AVAILABLEFOR YOUR ADVERTISEMENT

join me on Linkedin

join me on Researchgate

The exact mechanism of action for ganaxolone is unknown; however, results from animal studies suggest that it acts by blocking seizure propagation and elevating seizure thresholds.[3][4]

Ganaxolone is thought to modulate both synaptic and extrasynaptic GABAA receptors to normalize over-excited neurons.[2] Ganaxolone’s activation of the extrasynaptic receptor is an additional mechanism that provides stabilizing effects that potentially differentiates it from other drugs that increase GABA signaling.[2]

Ganaxolone binds to allosteric sites of the GABAA receptor to modulate and open the chloride ion channel, resulting in a hyperpolarization of the neuron.[2] This causes an inhibitory effect on neurotransmission, reducing the chance of a successful action potential (depolarization) from occurring.[2][3][4]

Ganaxolone is being investigated for potential medical use in the treatment of epilepsy. It is well tolerated in human trials, with the most commonly reported side effects being somnolence (sleepiness), dizziness, and fatigue.[5] Trials in adults with focal onset seizures and in children with infantile spasms have recently been completed.[6][7] There are ongoing studies in patients with focal onset seizures, PCDH19 pediatric epilepsy, and behaviors in Fragile X syndrome.[6][7]

Ganaxolone has been shown to protect against seizures in animal models,[3][4] and to act a positive allosteric modulator of the GABAA receptor.[2][8]

The most common adverse events reported across clinical trials have been somnolence (sleepiness), dizziness, and fatigue.[5] In 2015, the MIND Institute at the University of California, Davis, announced that it was conducting, in collaboration with Marinus Pharmaceuticals, a randomized, placebo-controlled, Phase 2 clinical trial evaluating the effect of ganaxolone on behaviors associated with Fragile X syndrome in children and adolescents.[9][10][11]