Oat Straw (Avena sativa) helpful in calming the nerves of those who are detoxing from drug or alcohol addiction, and can even help curb nicotine cravings.

July 28, 2014 10:49 am / 13 Comments on Oat Straw (Avena sativa) helpful in calming the nerves of those who are detoxing from drug or alcohol addiction, and can even help curb nicotine cravings.

Oat Straw (Avena sativa) – Not only can this herb effectively treat anxiety, it is also used to treat migraines, shingles, fatigue, and even epilepsy. This herb can be especially helpful in calming the nerves of those who are detoxing from drug or alcohol addiction, and can even help curb nicotine cravings.

Are you feeling stressed, tired, depressed, fed-up, run down or even lacking your usual sexual desire? If so, have you considered a daily dose of Avena sativa (also known as Oats or Oatstraw)?

This wonderful herb is thought to be soothing to the brain and nervous system, whilst at the same time increasing sexual desire, and performance, in both men and women!

Avena sativa is quickly becoming a popular natural alternative to pharmaceutical erection enhancers without the dangerous side effects. Also known as Oats Milky Seed or Oatstraw, Avena Sativa is used to stimulate both men and women quickly and effectively. It is often described as the “Natural Viagra”! Its stimulating effects are well known in the animal world, especially with horses where it is widely known that if you feed them oats their behaviour will be wild and energetic! And we’ve all heard the term “sowing your oats”.

In women, the effect seems to be that of increasing sexual desire rather than physical performance. Avena sativa contains compounds which are both sedative and soothing to the brain and nervous system, hence it is said to be a good herb as a nerve restorative. In women the aphrodisiac effect seems to work by relaxing the body which in turn allows a natural increase in desire.

In men it appears to be effective for treating impotence and premature ejaculation, probably by increasing healthy blood flow.

As a food, oats are known to be good for the heart because they keep blood fats under control. They also have other medicinal properties.

Avena sativa seeds are not only a rich source of carbohydrate and soluble fibre, they also have the highest content of Iron, Zinc and Manganese of any grain. It is said to be useful as a nerve restorative.

Avena sativa has no known side effects, unlike the sometimes dangerous sexual prescription drugs. It is used as a nervous system general tonic as well as a general health tonic.

Avena sativa is often the primary ingredient in expensive sexual formulas and in the popular alternatives Herbal V, Cobra and Biogra. There is no need to purchase expensive herbal formulas. The pure herb is more powerful and is not expensive to use.

Avena sativa does not appear to interact with drugs so it is often used as a safe alternative to other herbs that are used for anxiety, such as St John’s wort, which cannot be taken with many prescription medications. Avena sativa may also be of use in helping with drug withdrawal and is often combined with valerian and skullcap.

Oats are sometimes added to the bath as a topical treatment for the skin condition eczema. Generally, there are no side effects or contra-indications from using avena sativa herbal supplements. 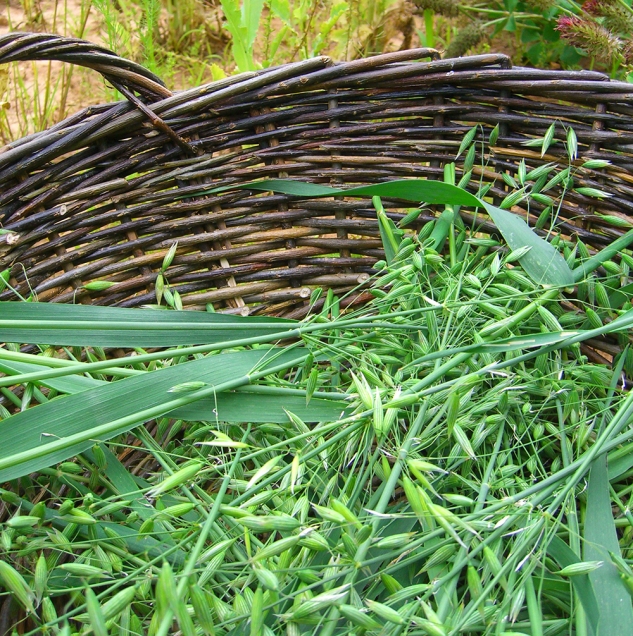 Medicinal Uses
Oatstraw is a cooling nervine and uterine tonic, anti-depressant, anti-spasmodic, nutritive, demulcent, and vulnerary herb. It’s high in vitamin E, protein, and minerals, and works by essentially feeding and soothing the nervous system, especially in times of stress, nervous exhaustion, and depression. It’s extremely helpful in menopause cases and with the recovery from shingles, estrogen deficiencies, persistant colds, and muscular sclerosis. As a tonic herb, it’s helpful for the whole system and can boost brain function and metabolism. It has high levels of silicic acid which help treat skin conditions such as excema, psoriasis, and irritations when applied externally as a soothing bath or compress. For depression, it combines well with lady’s slipper and skullcap. In Aryuvedic medicine, oatstraw is used for treating addictions and considered rejuvenating.

Dosage
Oatstraw can be taken as a tincture, with 3-5 ml three times daily, made into an infusion to taste drunk throughout the day. An infusion of oatstraw is high in B vitamins and protein. Oats, the fruit of the plant, can be made into a porridge or gruel. For irritated skin, both oatstraw and oats can be used in a bath at 1 pound of straw to 2 liters of water, boiled for half an hour, added to the bath water. As a foot-soak, it can help rejuvenate tired feet, especially when combined with a little peppermint and green tea. Oats themselves can be ground up and used in skincare products like as washes and scrubs (such as in my Dirty Girl Facial Scrub) and added to bath waters.