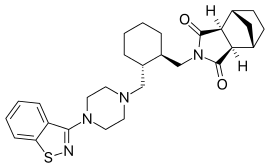 Lurasidone – it having been developed and launched by Sumitomo Dainippon Pharma. Lurasidone was launched for schizophrenia in the US by Sumitomo’s US subsidiary Sunovion Pharmaceuticals.

An improved process for the preparation of lurasidone and its intermediate

Improved process for preparing pure (3aR,7aR)-4′-(benzo[d]isothiazol-3-yl)octahydrospiro[isoindole-2,1′-piperazin]-1′-ium methanesulfonate, useful as a key intermediate in the synthesis of lurasidone. Also claims a process for purifying lurasidone hydrochloride, useful for treating schizophrenia and bipolar disorders. In July 2016, Newport Premium™ reported that Piramal Enterprises was capable of producing commercial quantities of lurasidone hydrochloride and holds an active US DMF for the drug since March 2015.

Lurasidone (the Compound-I), is an atypical antipsychotic used in the treatment of schizophrenia and bipolar disorders.The drug is marketed as hydrochloride salt (the compound-I.HCl) by Sunovion Pharms Inc.under the tradename”LATUDA”, in the form of oral tablets. Latuda is indicated for the treatment of patients with schizophrenia. Lurasidone hydrochloride has the chemical name ((3aR,4S,7R,7aS)-2-[((lR,2R)-2-{ [4-(l,2-benzisothiazol-3-yl)-piperazin-l-yl]methyl}cyclohexyl)-methyl]hexahydro-lH-4,7-methanisoindol-l,3-dione hydrochloride, and is structurally represented as follows;

Lurasidone being an important antipsychotic agent; a number of processes for its preparation as well as for its intermediates are known in the art.

US Patent No. 5,532,372 describe a process for the synthesis of Lurasidone, which is illustrated below in Scheme-I. In the process, the compound, cyclohexane- l,2-diylbis(methylene) dimethanesulfonate(referred to as the compound-Ill) is reacted with 3-(l-piperazinyl-l,2-benzisothiazole(referred to as the compound-IV) in acetonitrile, and in the presence of sodium carbonate to provide corresponding quaternary ammonium salt as 4′-(benzo[d]isothiazol-3-yl)octahydrospiro[isoindole-2, r-piperazin]-l’-ium methanesulfonate (the compound-II). The compound-II is further treated with bicyclo[2.2.1]heptane-2-exo-3-exo-dicarboximide in xylene, in the presence of potassium carbonate and dibenzo-18-crown-6-ether to provide lurasidone.

US Published Patent Application 2011/0263848 describes a process for the preparation of the quaternary ammonium salt (the compound-II) which comprises reacting 4-(l,2-benzisothiazol-3-yl)piperazine with (lR,2R)-l,2-bis(methanesulfonyloxymethyl)- cyclohexane in a solvent such as toluene in the presence of a phosphate salt.

Indian Published Patent Application 2306/MUM/2014 (” the IN’2306 Application”) describes a process for the synthesis of lurasidone and the intermediates thereof, comprising reacting (R,R) trans l,2-bis(methane sulphonyl methyl)cyclohexane with 3-(Piperazine-l-yl)benzo[d]isothiazole in presence of a mixture of two or more polar aprotic solvents selected from acetonitrile, N,N-dimethyl formamide (DMF) and/or Ν,Ν-dimethyl acetamide (DMAc), and a base at reflux temperature to obtain the quaternary ammonium salt (the compound II), which is then converted to lurasidone. The IN’2306 application demonstrated preparation of the compound II using the solvent combination such as acetonitrile-DMF and acetonitrile-DMAc.

US Published Patent Application 2011/0263847 describes a process for the preparation of the quaternary ammonium salt (the compound-II) comprising reacting 4-(l,2-benzisothiazol-3-yl)piperazine with (lR,2R)-l,2-bis(methanesulfonyloxymethyl)cyclohexane in a solvent such as toluene, wherein the piperazine compound is used in an excess amount i.e. 1.8 to 15 moles with respect to ( 1R,2R)- 1 ,2-bis(methanesulfonyloxymethyl)cyclohexane.

Chinese Published Patent Application 102731512 describes a process for the preparation of the quaternary ammonium salt (the compound-II) comprises reaction of 4-(l,2-benzisothiazol-3-yl)piperazine with (lR,2R)-l,2-bis(methanesulfonyloxymethyl)cyclohexane in a solvent such as toluene in the presence of a phase transfer catalyst.

It is evident from the discussion of the processes for the preparation of the quaternary ammonium salt (the compound-II), described in the afore cited patent documents that the reported processes primarily involve use of acetonitrile either as the single solvent or in a mixture of solvents. Acetonitrile is a relatively toxic, and not an environment friendly solvent. Due to its toxic nature, it can cause adverse health effects also. Acetonitrile is covered under Class 2 solvents i.e. solvents to be limited, and residual solvent limit of acetonitrile is 410 ppm in a drug substance as per the ICH (International Conference on Harmonisation) guidelines for residual solvents. Moreover, acetonitrile is a costlier solvent, which renders the process costlier and hence, is not an industrially feasible solvent.

It is also evident from the discussion of the processes described in afore cited patent documents that some of the reported processes involve use of high boiling solvents such as toluene and dimethylformamide as reaction solvent, which subsequently require high reaction temperatures, and this in turn leads to tedious workup procedures. In view of these drawbacks, there is a need to develop an industrially viable commercial process for the preparation of lurasidone and its intermediates; which is simple, efficient and cost-effective process and provides the desired compounds in improved yield and purity.

Example-2: Preparation of Lurasidone free base.

Charged water (200 ml) and IPA (200 ml) in flask followed by the addition of Lurasidone hydrochloride (50 gm, residual acetone: 5769 ppm). The reaction mixture was heated at a temperature of 75-80 °C for about 30 min. The reaction mixture was cooled to 20-30 °C and stirred for about 2 hours. The precipitated solid was filtered and isolated as pure Lurasidone hydrochloride (residual acetone: 2 ppm) (BUSINESS WIRE)– Sunovion Pharmaceuticals Inc. today announced that the U.S. Food and Drug Administration (FDA) approved two new indications for the use of Latuda® (lurasidone HCl) as 1) monotherapy and 2) adjunctive therapy with either lithium or valproate, both to treat adult patients with major depressive episodes associated with bipolar I disorder (bipolar depression).

Lurasidone (trade name Latuda) is an atypical antipsychotic developed by Dainippon Sumitomo Pharma and marketed by Sunovion in the USA. It was approved by the U.S. Food and Drug Administration (FDA) for treatment of schizophrenia on October 28, 2010  after a review that found that two of the four Phase III clinical trials supported efficacy, while one showed only marginal efficacy and one was not interpretable because of high drop-out rates. It is currently pending approval for the treatment of bipolar disorder in the United States. It was launched in Canada for the treatment of schizophrenia in September 2012, Health Canada giving their Summary Basis of Decision (SBD) as favourable on October 15, 2012

Lurasidone (trade name Latuda) is an atypical antipsychotic developed by Dainippon Sumitomo Pharma.[1] It was approved by the U.S. Food and Drug Administration (FDA) for treatment of schizophrenia on October 28, 2010[2] after a review that found that two of the four Phase III clinical trials supported efficacy, while one showed only marginal efficacy and one was not interpretable because of high drop-out rates.[3] It is currently pending approval for the treatment of bipolar disorder in the United States.

In clinical studies, lurasidone alleviates positive symptoms (e.g., hallucinations, delusions) without inducing extrapyramidal side effects except for akathisia,[4] despite its potent D2 antagonistic actions. Effectiveness against negative symptoms of schizophrenia has yet to be established.

Lurasidone may be useful for treating the cognitive and memory deficits seen in schizophrenia. In animal studies, it reversed dizocilpine-induced learning and memory impairment and was found to be superior in doing this to all of the other antipsychotics examined, including risperidone, olanzapine, quetiapine, clozapine, aripiprazole, and haloperidol.[5][6] Lurasidone has activity at several serotonin receptors that are involved in learning and memory, and unlike most other antipsychotics, lacks any anticholinergic effects (which are known to impair cognitive processes and memory).[5] These properties may underlie its improved effectiveness in treating these symptoms relative to older agents.[5]