The U.S. Food and Drug Administration today approved Amjevita (adalimumab-atto) as a biosimilar to Humira (adalimumab) for multiple inflammatory diseases.

Amjevita is approved for the following indications in adult patients:

Health care professionals should review the prescribing information in the labeling for detailed information about the approved uses.

“This is the fourth FDA-approved biosimilar. The biosimilar pathway is still a new frontier and one that we expect will enhance access to treatment for patients with serious medical conditions,” said Janet Woodcock, M.D., director of the FDA’s Center for Drug Evaluation and Research.

Biological products are generally derived from a living organism and can come from many sources, including humans, animals, microorganisms or yeast. A biosimilar is a biological product that is approved based on a showing that it is highly similar to an already-approved biological product and has no clinically meaningful differences in terms of safety, purity and potency (i.e., safety and effectiveness) from the reference product, in addition to meeting other criteria specified by law.

The FDA’s approval of Amjevita is based on review of evidence that included structural and functional characterization, animal study data, human pharmacokinetic and pharmacodynamics data, clinical immunogenicity data and other clinical safety and effectiveness data that demonstrates Amjevita is biosimilar to Humira. It has been approved as a biosimilar, not as an interchangeableproduct.

Like Humira, the labeling for Amjevita contains a Boxed Warning to alert health care professionals and patients about an increased risk of serious infections leading to hospitalization or death. The Boxed Warning also notes that lymphoma and other malignancies, some fatal, have been reported in children and adolescent patients treated with tumor necrosis factor blockers, including adalimumab products. The drug must be dispensed with a patient Medication Guide that describes important information about its uses and risks. 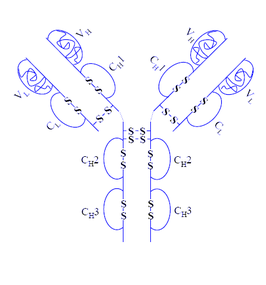 Oncobiologics, Inc. announced that it has received approval to initiate a Phase I clinical trial in Europe for its first biosimilar molecule, ONS-3010, a highly biosimilar version… READ MORE VIENNA, Feb. 15, 2013  AbbVie  announced the first long-term, patient-reported health outcomes data from analyses of the Phase 3 IMAgINE-1 trial. The analyses assessed improvements in health-related quality of life (HRQOL) measures for pediatric patients aged 6 to 17 years with severe active Crohn’s disease, taking HUMIRA, who had an inadequate response, were intolerant or had contraindications to conventional therapy, as well as the work productivity of their caregivers throughout the 52-week study. The results of these analyses are being presented this week at the European Crohn’s and Colitis Organisation (ECCO) 8th Annual Congress.

Adalimumab (HUMIRA, Abbott) is the third TNF inhibitor, after infliximab and etanercept, to be approved in the United States. Like infliximab and etanercept, adalimumab binds to Tumor necrosis factor-alpha (TNFα), preventing it from activating TNF receptors. Adalimumab was constructed from a fully human monoclonal antibody, while infliximab is a mouse-human chimeric antibody and etanercept is a TNF receptor-IgG fusion protein. TNFα inactivation has proven to be important in downregulating the inflammatory reactions associated with autoimmune diseases. As of 2008 adalimumab has been approved by the U.S. Food and Drug Administration (FDA) for the treatment of rheumatoid arthritis, psoriatic arthritis, ankylosing spondylitis, Crohn’s disease, moderate to severe chronic psoriasis and juvenile idiopathic arthritis. Although only approved for ulcerative colitis from late 2012 by the FDA in the disease’s management, it has been used for several years in cases that have not responded to conventional treatment at standard dosing for Crohn’s Disease.

However, because TNFα is part of the immune system that protects the body from infection, prolonged treatment with adalimumab may slightly increase the risk of developing infections.

HUMIRA (“Human Monoclonal Antibody in Rheumatoid Arthritis”) is marketed in both preloaded 0.8 mL syringes and also in preloaded pen devices (called Humira Pen), both injected subcutaneously, typically by the patient at home.

Adalimumab was discovered as a result of the collaboration between BASF Bioresearch Corporation (Worcester, Massachusetts, a unit of BASF) and Cambridge Antibody Technology which began in 1993.[4]

The drug candidate was discovered initially using CAT’s phage display technology and named D2E7.[2] The key components of the drug were found by guiding the selection of human antibodies from phage display repertoires to a single epitope of an antigen TNF alpha.[5] The ultimate clinical candidate, D2E7, was created and manufactured at BASF Bioresearch Corporation and taken through most of the drug development process by BASF Knoll, then further development, manufacturing and marketing by Abbott Laboratories, after Abbott acquired the pharmaceutical arm of BASF Knoll.[6]

Adalimumab was the first fully human monoclonal antibody drug approved by the FDA. It was derived from phage display,[1] and was discovered through a collaboration between BASF Bioresearch Corporation (Worcester, Massachusetts, a unit of BASF) and Cambridge Antibody Technology as D2E7,[2] then further manufactured at BASF Bioresearch Corporation and developed by BASF Knoll (BASF Pharma) and, ultimately, manufactured and marketed by Abbott Laboratories after the acquisition of BASF Pharma by Abbott.

Components of a Humira autoinjector pen