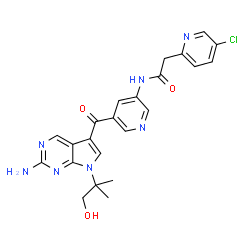 Tropomyosin-related kinases (Trks) are a family of receptor tyrosine kinases activated by neurotrophins. Trks play important roles in pain sensation as well as tumour cell growth and survival signaling. Thus, inhibitors of Trk receptor kinases might provide targeted treatments for conditions such as pain and cancer. Recent developments in this field have been reviewed by Wang et al in Expert Opin. Ther.

As one of the largest family of proteins encoded by the human genome, protein kinases are the central regulators of signal transduction as well as control of various complex cell processes. Receptor tyrosine kinases (RTKs) are a subfamily of protein kinases (up to 100 members) bound to the cell membrane that specifically act on the tyrosine residues of proteins. One small group within this subfamily is the Trk kinases, with three highly homologous isoforms: TrkA, TrkB, and TrkC. All three isofonns are activated by high affinity growth factors named neurotrophins (NT): i) nerve growth factor (NGF), which activates TrkA; ii) brain-derived neurotrophic factor (BDNF) and NT-4/5, which activate TrkB; and iii) NT-3, which activates TrkC. The binding of neurotrophins to the extracellular domain of Trks causes the Trk kinase to autophosphorylate at several intracellular tyrosine sites and triggers downstream signal transduction pathways. Trks and neurotrophins are well known for their effects on neuronal growth and survival.

Originally isolated from neuronal tissues, Trks were thought to mainly affect the maintenance and survival of neuronal cells. However, in the past 20 years, increasing evidence has suggested that Trks play key roles in malignant transformation, chemotaxis, metastasis, and survival signaling in human tumors. The association between Trks and cancer focused on prostate cancer in earlier years and the topic has been reviewed. For example, it was reported that malignant prostate epithelial cells secrete a series of neurotrophins and at least one Trks. In pancreatic cancer, it was proposed that paracrine and/or autocrine neurotrophin-Trk interactions may influence the invasive behavior of the cancer. TrkB was also reported to be overexpressed in metastatic human pancreatic cancer cells. Recently, there have been a number of new findings in other cancer settings. For example, a translocation leads to expression of a fusion protein derived from the W-terminus of the ETV9 transcription factor and the C-terminal kinase domain of TrkC. The resulting ETV6-TrkC fusions are oncogenic in vitro and appear causative in secretory breast carcinoma and some acute myelogenous leukemias (AML). Constitutively active TrkA fusions occurred in a subset of papillary thyroid cancers and colon carcinomas. In neuroblastoma, TrkB expression was reported to be a strong predictor of aggressive tumor growth and poor prognosis, and TrkB overexpression was also associated with increased resistance to chemotherapy in neuroblastoma tumor cells in vitro. One report showed that a novel splice variant of TrkA called TrkAIII signaled in the absence of neurotrophins through the inositol phosphate-AKT pathway in a subset of neuroblastoma. Also, mutational analysis of the tyrosine kinome revealed that Trk mutations occurred in colorectal and lung cancers. In summary, Trks have been linked to a variety of human cancers, and discovering a Trk inhibitor and testing it clinically might provide further insight to the biological and medical hypothesis of treating cancer with targeted therapies.

Besides the newly developed association with cancer, Trks are also being recognized as an important mediator of pain sensation. Congenital insensitivity to pain with anhidrosis (CIPA) is a disorder of the peripheral nerves (and normally innervated sweat glands) that prevents the patient from either being able to adequately perceive painful stimuli or to sweat. TrkA defects have been shown to cause CIPA in various ethnic groups.

Currently, non-steroidal anti-inflammatory drugs (NSAIDs) and opiates have low efficacy and/or side effects (e.g., gastrointestinal/renal and psychotropic side effects, respectively) against neuropathic pain and therefore development of novel pain treatments is highly desired. It has been recognized that NGF levels are elevated in response to chronic pain, injury and inflammation and the administration of exogenous NGF increases pain hypersensitivity. In addition, inhibition of NGF function with either anti- NGF antibodies or non-selective small molecule Trk inhibitors has been shown to have effects on pain in animal models. It appears that a selective Trk inhibitor (inhibiting at least NGF’s target, the TrkA receptor) might provide clinical benefit for the treatment of pain. Excellent earlier reviews have covered targeting NGF/BDNF for the treatment of pain so this review will only focus on small molecule Trk kinase inhibitors claimed against cancer and pain. However, it is notable that the NGF antibody tanezumab was very recently reported to show good efficacy in a Phase II trial against osteoarthritic knee pain.”

US provisional application US61/471758 was filed 5th April 2012 and the whole contents of that application in it’s entirety are herewith included by reference thereto.

Thus Trk inhibitors have a wide variety of potential medical uses. There is a need to provide new Trk inhibitors that are good drug candidates. In particular, compounds should preferably bind potently to the Trk receptors in a selective manner compared to other receptors, whilst showing little affinity for other receptors, including other kinase and / or GPC receptors, and show functional activity as Trk receptor antagonists. They should be non-toxic and demonstrate few side-effects. Furthermore, the ideal drug candidate will exist in a physical form that is stable, non-hygroscopic and easily formulated. They should preferably be e.g. well absorbed from the gastrointestinal tract, and / or be injectable directly into the bloodstream, muscle, or subcutaneously, and / or be metabolically stable and possess favourable pharmacokinetic properties.

Among the aims of this invention are to provide orally-active, efficacious, compounds and salts which can be used as active drug substances, particularly Trk antagonists, i.e. that block the intracellular kinase activity of the Trk, e.g. TrkA (NGF) receptor. Other desirable features include good HLM/hepatocyte stability, oral bioavailability, metabolic stability, absorption, selectivity over other types of kinase, dofetilide selectivity. Preferable compounds and salts will show a lack of CYP inhibition/induction, and be CNS- sparing.

d]pyrimidin-5-yl}methanone (75.0 g, 130 mmol ) (see Preparation 51 ), 1-propylphosphonic acid cyclic anhydride (187 mL, 317 mmol, 50% solution in EtOAc) and triethylamine (61.9 mL, 444 mmol ) in THF (423 mL). The mixture was stirred at 25°C for 2 hours then saturated aqueous sodium bicarbonate (400 mL) was added and the organic layer was separated. The aqueous phase was extracted with EtOAc (400 mL) and all organic phases were combined and dried over sodium sulfate then evaporated in vacuo. The residue brown solid was dissolved in trifluoroacetic acid (300 mL) and the solution was stirred at 50°C for 3 hours then evaporated in vacuo. Methanol (1800 mL) was added to the residue and the mixture was filtered. The filtrate was evaporated in vacuo and azeotroped with ethanol (3 x 200 mL).

The Discovery of a Potent, Selective, and Peripherally Restricted Pan-Trk Inhibitor (PF-06273340) for the Treatment of Pain