The US Food and Drug Administration (FDA) has approved Bayer HealthCare’s Gadavist (gadobutrol) injection as the first magnetic resonance contrast agent for evaluation of breast cancer in the US.

The agency has approved the new indication for Gadavist injection for intravenous use with magnetic resonance imaging of the breast to assess the presence and extent of malignant breast disease.

Approval is based on priority review of two Phase III studies with identical design (GEMMA-1 and GEMMA-2).

For intravenous use in magnetic
reasonance imaging (MRI) in adults and
pediatric patients over 2 years of age for
whole body MRI including the head, neck,
liver, breast, musculoskeletal system and
soft tissue pathologies
The US Food and Drug Administration (FDA) has approved Bayer HealthCare’s Gadavist (gadobutrol) injection as the first magnetic resonance contrast agent for evaluation of breast cancer in the US. 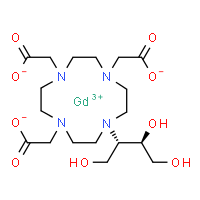 It received marketing approval in Canada[1] and in the United States.[2][3][4]

Gadobutrol is marketed by Bayer Schering Pharma as Gadovist, and by Bayer HealthCare Pharmaceuticals as Gadavist.[6]

A different synthesis started from the previously reported tetraaza cyclopentaacenaphthylene (XV). Treatment of (XV) with a solution of piperazine at pH 6 gave rise to the bicyclic lactam (XVI). Alkylation of (XVI) with bromoacetic acid, followed by basic lactam hydrolysis furnished the tris(carboxymethyl) derivative (X), which was processed as in Scheme 3.

In a related method for obtaining the precursor (V), epoxide (II) was condensed with the tosyl-protected tetraamine (XIII) in an autoclave at 170 C to give (XIV). The N-tosyl groups of (XIV) were then removed by treatment with lithium metal in liquid ammonia, yielding intermediate (III), which was then subjected to alkylation with bromoacetic acid, followed by acid hydrolysis

The macrocyclic tetraamine (I) was protected as the triaminomethane derivative (VIII) by treatment with either triethyl orthoformate (4) or with dimethylformamide dimethylacetal (5). Alkylation of (VIII) with bromoacetic acid gave rise to the N-formyl N’,N”,N”’-tris(carboxymethyl) compound (IX). After basic hydrolysis of the formamide function of (IX), the resultant N-deprotected amine (X) was condensed with epoxide (II) to yield (XI). Further complexation with GdCl3 and ketal group hydrolysis led to the target compound

Recovery of the product (Gadobutrol)