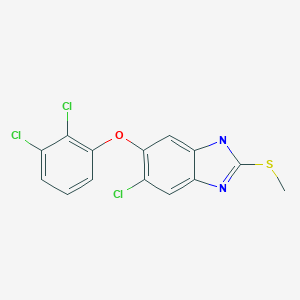 Triclabendazole, sold under the brand name Egaten among others, is a medication used to treat liver flukes, specifically fascioliasisand paragonimiasis.[1] It is very effective for both conditions.[1] Treatment in hospital may be required.[1] It is taken by mouth with typically one or two doses being required.[1]

Side effects are generally few, but can include abdominal pain and headaches.[1] Biliary colic may occur due to dying worms.[2] While no harms have been found with use during pregnancy, triclabendazole has not been well studied in this population.[2] It is a member of the benzimidazole family of medications for worms.[1]

It is a member of the benzimidazole family of anthelmintics. The benzimidazole drugs share a common molecular structure, triclabendazole being the exception in having a chlorinated benzene ring but no carbamate group. Benzimidazoles such as triclabendazole are generally accepted to bind to beta-tubulin therefore preventing the polymerization of microtubules.

Triclabendazole, chemically known as 5-chloro-6-(2,3-dichlorophenoxy)-2- (methylthio)-lH-benzimidazole represented by formula I,

is a halogenated benzimidazole compound that possesses high activity against immature and adult stages of the liver fluke, Faciola hepatica. The intensive use of Triclabendazole in endemic areas of facioliasis has resulted in the development of liver flukes resistant to this compound.

US 4, 197,307 discloses the process for the preparation of Triclabendazole, wherein 4- chloro-5-(2,3-dichlorophenoxy)-l,2-benzenediamine is reacted with carbondisulfide to give cyclic benzimidazole thione, which is further subjected to alkylation reaction with dimethyl sulfate to give Triclabendazole.

However, the above prior art process is not preferred at a commercial scale because the hydrolysis of N-(4,5-dichloro-2-nitrophenyl)acetamide of formula VII is carried out before condensation with 2,3-dichlorophenol of formula VI, which is labile to formation of impurities and moreover the condensation is carried out in the presence of a phase transfer catalyst. Further, Iron is used as a catalyst for reduction which is riot environment friendly and involves tedious work-up. The final compound Triclabendazole is directly obtained by the methylating the compound of formula II using dimethylsulfate. The purity of thus obtained Triclabendazole is not high. Thus it is highly desirable to develop a process which overcomes most of the prior art drawbacks. The present inventors have developed a process for the preparation of Thiabendazole, which is environment friendly, technologically safe, simple and cost effective 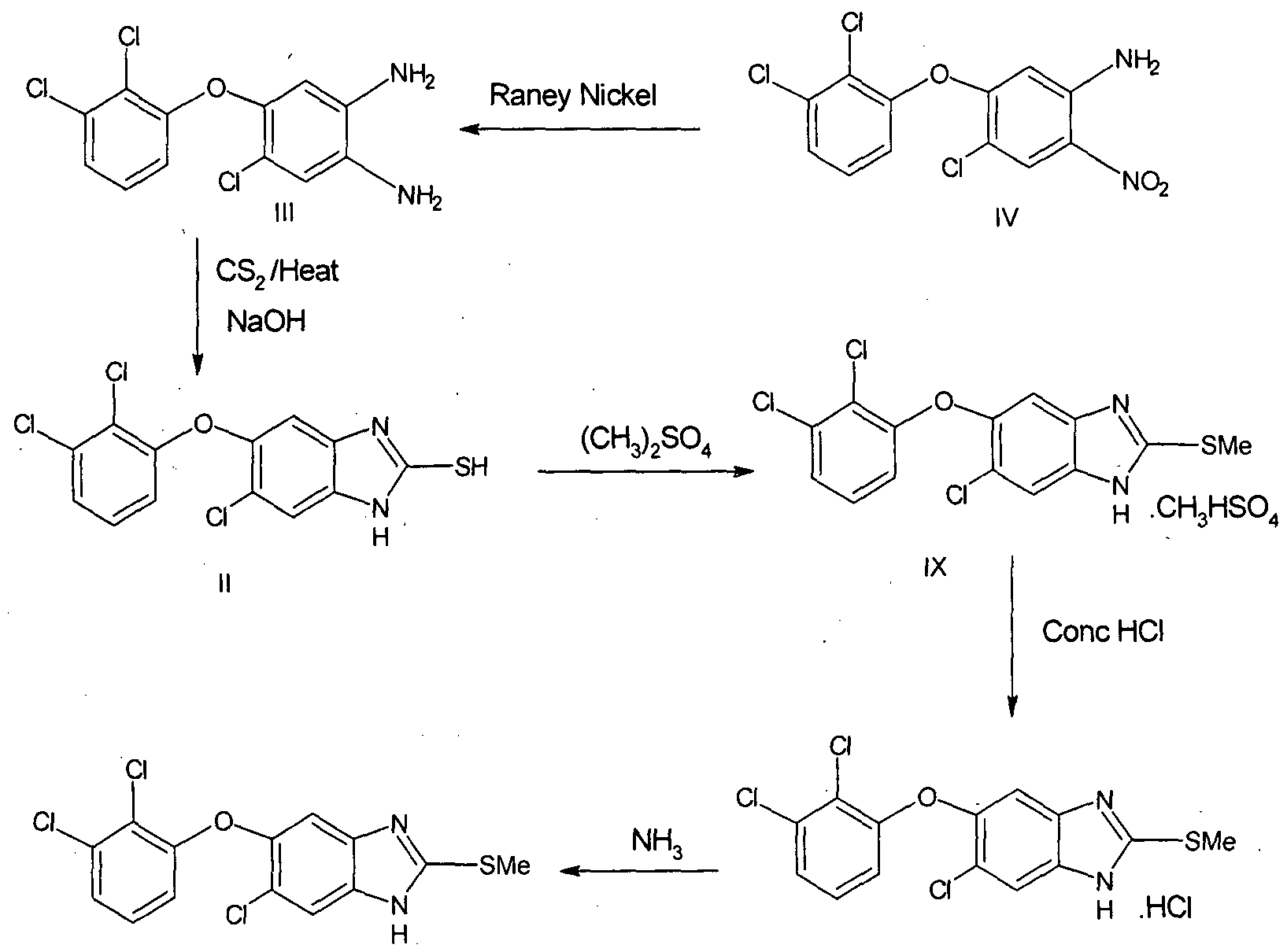 Example 1: Preparation of 5-chIoro-6-(2,3-dichlorophenoxy)-2-(methylthio)-lH- benzimidazole (I)

In the mixture of 4-chloro-5(2,3-dichlorophenoxy)-l ,2-phenylenediamine in methanol (800 g) and caustic lye (245 mL), carbondisulfide (259 g) was added slowly and the reaction mass was refluxed‘ for 6 hrs. After completion of the reaction water (2.5 L) and acetic acid was added over a period of 2hrs at 60°C. Water was added (2.5 litre) again and heated to 90°C for 2hrs, filtered and washed with hot water to obtain the title compound.

6-chloro-5(2,3-dichlorophenoxy)-l H- benzimidazole-2-thiol(400kg) was added to methanol (700 L) and heated to 40°C. Dimethyl sulphate was added slowly at 40°C to it. The reaction mass was heated to 60-65°C and maintain for 6hrs. After completion of the reaction the reaction mass was cooled to 15°C, centrifuged the material and washed with 75 L of methanol to obtain wet cake of Triclabendazole methanesulfonate (520-560 kg).

Triclabendazole methanesulfonate (200 g) and methanol (1.2 L) was refluxed, cooled and charcoal was added and refluxed again for 1 hr. The reaction mass was filtered and concentrated hydrochloric acid was added. The precipitate was‘ cooled to RT, stirred for 1 hr, filtered and Triclabendazole hydrochloride was isolated (250 g wet) .

The water was added to the above Triclabendazole hydrochloride and ammonia was charged and stired for 2-3 hrs. The reaction mass was filtered, washed with water and dried to obtain Triclabendazole.

Example 2:Preparation of 6-chloro-5(2,3-dichlorophenoxy)-2-(metylthio)-lH- benzimidazole In a RBF methanol (200 mL), 6-chloro-5(2,3-dichlorophenoxy)-lH- benzimidazole-2-thiol ((200 g) and dimethylsulfate (40 g) were heated to 60 ± 2°C and water (100 mL) was added and stirred for half an hr. Sodium carbonate solution (25 g Na2CC>3 in 200 mL water) was added slowly and temperature was raised to 60 °C and stirred for VA hr. After completion of reaction, the reaction mixture was cooled to 60°C, filtered, washed with water further washed with toluene and dried.

To the above wet crude 6-chloro-5(2,3-dichlorophenoxy)-2-(metylthio)-lH- benzimidazole, toluene (500 mL) was charged and water was removed azeotropically using Dean Stark apparatus. The mixture was heated to 100-1 12°C and 5 g charcoal was added, stirred for half an hr at 100-105°C. The reaction mixture was filtered through hyflow bed and washed with fresh toluene. The mother liquor was cooled to 70°C and isopropanol (7 mL) was added, cooled to room temperature to precipitate, filtered and washed with fresh toluene, dried at 75°C for 4 hrs to obtain pure Triclabendazole.

Example 1: Preparation of the present invention, the step of azole trichlorobenzene as follows:

[0021] 1,2,3-trichlorobenzene was added in the reaction kettle 43.5kg, 40kg of 50% aqueous potassium hydroxide solution, was heated at reflux for 7 hours, xylene was added 150L, 4,5- dichloro-2-nitro 41.4kg of aniline and a catalyst TBAB5kg, reacted for 8 hours, the reaction temperature is controlled at 125 ° C, slowly cooled to room temperature under stirring, to precipitate a large number of brown crystals, was filtered, washed with chilled xylene crystals paint IOkg, drained, washed with water to of drying to give 4-chloro-5- (2,3-dichlorophenoxy) -2_ nitroaniline 54kg, yield: 81%, melting point: 145 ° C~150 ° C, the substance pattern shown in Figure 1; wherein the compound is 1,2,3-trichlorobenzene of formula I in the reaction; 4,5-dichloro-2-nitroaniline reaction of a compound of formula II;

[0023] obtained in the first step chlorine _5_ 4_ (2, 3_-dichlorophenoxy) _2_ nitroaniline 54kg Dad added to the reaction, and then added at a concentration of 80% ethanol 540L, was heated until dissolution was added Raney nickel catalyst 5kg, was heated to a boil, a solution prepared by the dropwise addition of hydrazine hydrate and 30L 12kg ethanol solution dropwise 4 ~ 6 hours, the yellow solution was gradually faded, TLC detection reaction end, Raney nickel catalyst was removed by filtration, dried the filter cake was washed several times with ethanol, containing 4-chloro-5- (2,3-dichlorophenoxy) 1,2_ phenylenediamine filtrate was used directly in the next step, the filtrate was added potassium hydroxide 11kg after stirring until the whole solution was slowly added 18kg of carbon disulfide in the range of 25 V~30 ° C, after the addition was stirred at room temperature for 2 hours and then heated to reflux for 10 hours, add decolorizing charcoal 2.5kg, refluxing was continued for I h, cooled to 30 ° C or below, filtered, the filter cake was washed with ethanol, the filtrate after recovery of ethanol by distillation, the residue was diluted IOOkg added water, adjusted to pH 2 to 3 with 5% aqueous hydrochloric acid, filtered, washed well with water to nearly neutral, and drying, to give an off-white solid, 5-chloro-6- (2,3-dichlorophenoxy) -2-mercapto – benzimidazole- 47.5kg, melting point 290. . ~300 ° C, 85% yield; the pattern shown in Figure 2, wherein _5_ chloro-4- (2,3-dichlorophenoxy) -2_ nitroaniline compound of formula III in the reaction ; 4-chloro-5- (2,3-dichlorophenoxy) I, 2- phenylenediamine compound of formula IV in the reaction; 5-chloro-6- (2,3-dichlorophenoxy) -2-mercapto – benzimidazole compound of the formula V in the reaction;

Preparation [0024] The third step, triclabendazole, i.e., the reaction of the compound of formula VI:

[0025] The first gas _ ■ 5- obtained in step -6_ (2,3- _ ■ gas phenoxy) _2- mercapto – benzo taste Jie sit 47.5kg, oxygen potassium 8.5kg, a concentration of 80% 285kg of methanol, added to the reaction kettle was cooled to ice bath 5~10 ° C, was added dropwise dimethyl sulfate 19kg, 3 hours dropwise, stirring continued for 3 hours to obtain a reaction solution containing triclabendazole, the conditions of room temperature under added dropwise to the reaction solution containing triclabendazole in dilute sulfuric acid to adjust the pH 8-9, 50kg of purified water was added dropwise, dropwise 2 hours, stirring was continued for 2 hours at the same temperature, as a large amount of white solid precipitated a thick paste; 80kg of deionized water was added, stirred sufficiently dispersing the paste solids, filtered off with suction, washed to neutrality with 80kg purified water immersion, drying centrifuge, drying, to give a crude product triclabendazole 42kg, close was 81.5% with a purity of 95%, recrystallized from ethanol to give the desired product triclabendazole 39kg, yield 92.8%, content 99.5%, of which 5-chloro-6- (2,3-dichloro phenoxy) _2_ mercapto – benzimidazole compound of the formula V in the reaction; triclabendazole a compound of formula VI in the reaction.