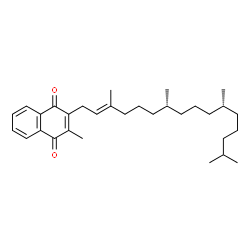 Phylloquinone is a family of phylloquinones that contains a ring of 2-methyl-1,4-naphthoquinone and an isoprenoid side chain. Members of this group of vitamin K 1 have only one double bond on the proximal isoprene unit. Rich sources of vitamin K 1 include green plants, algae, and photosynthetic bacteria. Vitamin K1 has antihemorrhagic and prothrombogenic activity.

Phytomenadione, also known as vitamin K1 or phylloquinone, is a vitamin found in food and used as a dietary supplement.[1][2] As a supplement it is used to treat certain bleeding disorders.[2] This includes in warfarin overdose, vitamin K deficiency, and obstructive jaundice.[2] It is also recommended to prevent and treat hemorrhagic disease of the newborn.[2] Use is typically recommended by mouth or injection under the skin.[2] Use by injection into a vein or muscle is recommended only when other routes are not possible.[2] When given by injection benefits are seen within two hours.[2]

Common side effects when given by injection include pain at the site of injection and altered taste.[2] Severe allergic reactions may occur with injected into a vein or muscle.[2] It is unclear if use during pregnancy is safe; however, use is likely okay during breastfeeding.[3] It works by supplying a required component for making a number of blood clotting factors.[2] Found sources include green vegetables, vegetable oil, and some fruit.[4]

Phytomenadione was first isolated in 1939.[5] It is on the World Health Organization’s List of Essential Medicines, the most effective and safe medicines needed in a health system.[6] The wholesale cost in the developing world is about 0.11 to 1.27 USD for a 10 mg vial.[7]In the United States a course of treatment costs less than 25 USD.[8] In 1943 Edward Doisy and Henrik Dam were given a Nobel Prizefor its discovery.[5]

A stereoisomer of phylloquinone is called vitamin k1 (note the difference in capitalization).

Vitamin K is a fat-soluble vitamin that is stable in air and moisture but decomposes in sunlight. It is a polycyclic aromatic ketone, based on 2-methyl–1,4-naphthoquinone, with a 3-phytyl substituent. It is found naturally in a wide variety of green plants, particularly in leaves, since it functions as an electron acceptor during photosynthesis, forming part of the electron transport chain of photosystem I.

Phylloquinone is an electron acceptor during photosynthesis, forming part of the electron transport chain of Photosystem I.

The best-known function of vitamin K in animals is as a cofactor in the formation of coagulation factors II (prothrombin), VII, IX, and X by the liver. It is also required for the formation of anticoagulant factors protein C and S. It is commonly used to treat warfarin toxicity, and as an antidote for coumatetralyl.