4-Hydroxy-TEMPO or TEMPOL, formally 4-hydroxy-2,2,6,6-tetramethylpiperidin-1-oxyl, is a heterocyclic compound. Like the related TEMPO, it is used as a catalyst and chemical oxidant by virtue of being a stable aminoxyl radical. Its major appeal over TEMPO is that is less expensive, being produced from triacetone amine, which is itself made via the condensation of acetone and ammonia. This makes it economically viable on an industrial scale.[3]

Example synthesis of 4-Hydroxy-TEMPO from phorone, which is itself made from acetone and ammonia

In biochemical research, 4-hydroxy-TEMPO has been investigated as an agent for limiting reactive oxygen species. It catalyzes the disproportionation of superoxide, facilitates hydrogen peroxide metabolism, and inhibits Fenton chemistry.[4] 4-Hydroxy-TEMPO, along with related nitroxides, are being studied for their potential antioxidant properties.[5]

On an industrial-scale 4-hydroxy-TEMPO is often present as a structural element in hindered amine light stabilizers, which are commonly used stabilizers in plastics, it is also used as a polymerisation inhibitor, particularly during the purification of styrene.

It is a promising model substance to inhibit SARS-CoV-2 RNA-dependent RNA polymerase.[6]

join me on Linkedin

join me on Researchgate 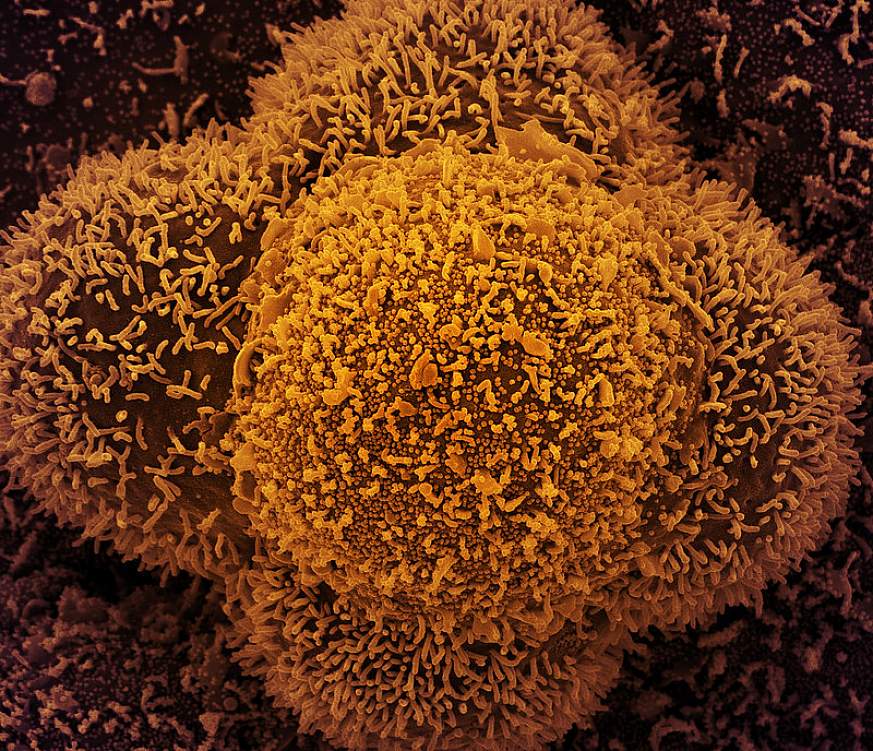 small spherical structures in the center of the image are SARS-CoV-2 virus particles. The string-like protrusions extending from the cells are cell projections or pseudopodium. NIAID

The experimental drug TEMPOL may be a promising oral antiviral treatment for COVID-19, suggests a study of cell cultures by researchers at the National Institutes of Health. TEMPOL can limit SARS-CoV-2 infection by impairing the activity of a viral enzyme called RNA replicase. The work was led by researchers at NIH’s Eunice Kennedy Shriver National Institute of Child Health and Human Development (NICHD). The study appears in Science.

“We urgently need additional effective, accessible treatments for COVID-19,” said Diana W. Bianchi, M.D., NICHD Director. “An oral drug that prevents SARS-CoV-2 from replicating would be an important tool for reducing the severity of the disease.”

The study team was led by Tracey A. Rouault, M.D., head of the NICHD Section on Human Iron Metabolism. It discovered TEMPOL’s effectiveness by evaluating a more basic question on how the virus uses its RNA replicase, an enzyme that allows SARS-CoV-2 to replicate its genome and make copies of itself once inside a cell.

Identifying this characteristic of the RNA replicase also enables researchers to exploit a weakness in the virus. TEMPOL can degrade iron-sulfur clusters, and previous research from the Rouault Lab has shown the drug may be effective in other diseases that involve iron-sulfur clusters. In cell culture experiments with live SARS-CoV-2 virus, the study team found that the drug can inhibit viral replication.

Based on previous animal studies of TEMPOL in other diseases, the study authors noted that the TEMPOL doses used in their antiviral experiments could likely be achieved in tissues that are primary targets for the virus, such as the salivary glands and the lungs.

“Given TEMPOL’s safety profile and the dosage considered therapeutic in our study, we are hopeful,” said Dr. Rouault. “However, clinical studies are needed to determine if the drug is effective in patients, particularly early in the disease course when the virus begins to replicate.”

The study team plans on conducting additional animal studies and will seek opportunities to evaluate TEMPOL in a clinical study of COVID-19.

About the Eunice Kennedy Shriver National Institute of Child Health and Human Development (NICHD): NICHD leads research and training to understand human development, improve reproductive health, enhance the lives of children and adolescents, and optimize abilities for all. For more information, visit https://www.nichd.nih.gov.

About the National Institutes of Health (NIH): NIH, the nation’s medical research agency, includes 27 Institutes and Centers and is a component of the U.S. Department of Health and Human Services. NIH is the primary federal agency conducting and supporting basic, clinical, and translational medical research, and is investigating the causes, treatments, and cures for both common and rare diseases. For more information about NIH and its programs, visit www.nih.gov.