“Patients with aTTP endure hours of treatment with daily plasma exchange, which requires being attached to a machine that takes blood out of the body and mixes it with donated plasma and then returns it to the body. Even after days or weeks of this treatment, as well as taking drugs that suppress the immune system, many patients will have a recurrence of aTTP,” said Richard Pazdur, M.D., director of the FDA’s Oncology Center of Excellence and acting director of the Office of Hematology and Oncology Products in the FDA’s Center for Drug Evaluation and Research. “Cablivi is the first targeted treatment that inhibits the formation of blood clots. It provides a new treatment option for patients that may reduce recurrences.”

Patients with aTTP develop extensive blood clots in the small blood vessels throughout the body. These clots can cut off oxygen and blood supply to the major organs and cause strokes and heart attacks that may lead to brain damage or death. Patients can develop aTTP because of conditions such as cancer, HIV, pregnancy, lupus or infections, or after having surgery, bone marrow transplantation or chemotherapy.

The efficacy of Cablivi was studied in a clinical trial of 145 patients who were randomized to receive either Cablivi or a placebo. Patients in both groups received the current standard of care of plasma exchange and immunosuppressive therapy. The results of the trial demonstrated that platelet counts improved faster among patients treated with Cablivi, compared to placebo. Treatment with Cablivi also resulted in a lower total number of patients with either aTTP-related death and recurrence of aTTP during the treatment period, or at least one treatment-emergent major thrombotic event (where blood clots form inside a blood vessel and may then break free to travel throughout the body).The proportion of patients with a recurrence of aTTP in the overall study period (the drug treatment period plus a 28-day follow-up period after discontinuation of drug treatment) was lower in the Cablivi group (13 percent) compared to the placebo group (38 percent), a finding that was statistically significant.

Common side effects of Cablivi reported by patients in clinical trials were bleeding of the nose or gums and headache. The prescribing information for Cablivi includes a warning to advise health care providers and patients about the risk of severe bleeding.

Health care providers are advised to monitor patients closely for bleeding when administering Cablivi to patients who currently take anticoagulants.

The FDA granted the approval of Cablivi to Ablynx.

In February 2019, caplacizumab-yhdp (CABLIVI, Ablynx NV) has been approved by the Food and Drug Administration for treatment of adult patients with acquired thrombotic thrombocytopenic purpura (aTTP). The drug is used in combination with plasma exchange and immunosuppressive therapy. [6] 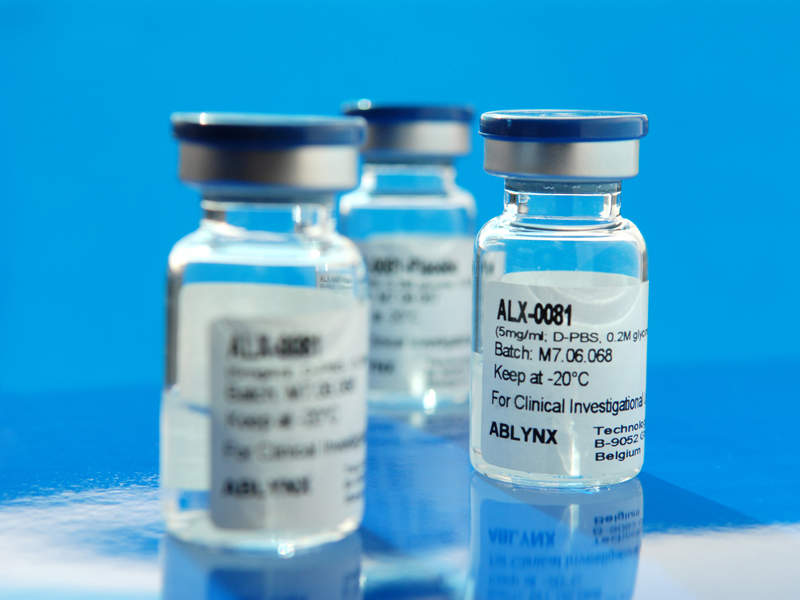