Acetylcholine chloride is obtained as white or off-white hygroscopic crystals, or as a crystalline powder. The salt is odorless, or nearly odorless, and is a very deliquescent powder. Acetylcholine bromide is obtained as deliquescent crystals, or as a white crystalline powder. The substance is hydrolyzed by hot water and alkali

Acetylcholine is an organic chemical that functions in the brain and body of many types of animals, including humans, as a neurotransmitter—a chemical released by nerve cells to send signals to other cells. Its name is derived from its chemical structure: it is an ester of acetic acid and choline. Parts in the body that use or are affected by acetylcholine are referred to as cholinergic. Substances that interfere with acetylcholine activity are called anticholinergics.

Inside the brain, acetylcholine functions as a neuromodulator—a chemical that alters the way other brain structures process information rather than a chemical used to transmit information from point to point. The brain contains a number of cholinergic areas, each with distinct functions. They play an important role in arousal, attention, and motivation.

Partly because of its muscle-activating function, but also because of its functions in the autonomic nervous system and brain, a large number of important drugs exert their effects by altering cholinergic transmission. Numerous venoms and toxins produced by plants, animals, and bacteria, as well as chemical nerve agents such as Sarin, cause harm by inactivating or hyperactivating muscles via their influences on the neuromuscular junction. Drugs that act on muscarinic acetylcholine receptors, such as atropine, can be poisonous in large quantities, but in smaller doses they are commonly used to treat certain heart conditions and eye problems. Scopolamine, which acts mainly on muscarinic receptors in the brain, can cause delirium and amnesia. The addictive qualities of nicotine derive from its effects on nicotinic acetylcholine receptors in the brain.

Acetylcholine is a choline molecule that has been acetylated at the oxygen atom. Because of the presence of a highly polar, charged ammonium group, acetylcholine does not penetrate lipid membranes. Because of this, when the drug is introduced externally, it remains in the extracellular space and does not pass through the blood–brain barrier. A synonym of this drug is miochol.

Acetylcholine (ACh) was first identified in 1915 by Henry Hallett Dale for its actions on heart tissue. It was confirmed as a neurotransmitter by Otto Loewi, who initially gave it the name Vagusstoff because it was released from the vagus nerve. Both received the 1936 Nobel Prize in Physiology or Medicine for their work. Acetylcholine was also the first neurotransmitter to be identified. 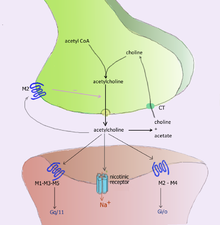