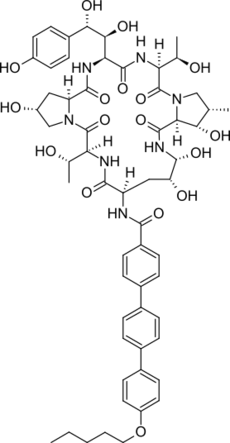 Anidulafungin (brand names: Eraxis (in U.S. and Russia), Ecalta (in Europe)) is a semisynthetic echinocandin used as anantifungal drug. Anidulafungin was originally manufactured and submitted for FDA approval by Vicuron Pharmaceuticals.[1] Pfizeracquired the drug upon its acquisition of Vicuron in the fall of 2005.[2] Pfizer gained approval by the Food and Drug Administration(FDA) on February 21, 2006;[3] it was previously known as LY303366. Preliminary evidence indicates it has a similar safety profile tocaspofungin. Anidulafungin has proven efficacy against esophageal candidiasis, but its main use will probably be in invasive Candidainfection;[4][5][6] it may also have application in treating invasive Aspergillus infection. It is a member of the class of antifungal drugs known as the echinocandins; its mechanism of action is by inhibition of (1→3)-β-D-glucan synthase, an enzyme important to the synthesis of the fungal cell wall.

Anidulafungin significantly differs from other antifungals in that it undergoes chemical degradation to inactive forms at body pH and temperature. Because it does not rely on enzymatic degradation or hepatic or renal excretion, the drug is safe to use in patients with any degree of hepatic or renal impairment.[7]

Anidulafungin is not evidently metabolized by the liver. This specific drug undergoes slow chemical hydrolysis to an open-ring peptide which lacks antifungal activity. The half-life of the drug is 27 hours. Thirty percent is excreted in the feces (10% as unchanged drug). Less than 1% is excreted in the urine.[8][9][10]

Anidulafungin inhibits glucan synthase, an enzyme important in the formation of (1→3)-β-D-glucan, a major fungal cell wall component. Glucan synthase is not present in mammalian cells, so it is an attractive target for antifungal activity.[11]

Anidulafungin is manufactured via semisynthesis. The starting material is echinocandin B (a lipopeptide fermentation product ofAspergillus nidulans or the closely related species, A. rugulosus), which undergoes deacylation (cleavage of the linoleoyl side chain) by the action of a deacylase enzyme from the bacterium Actinoplanes utahensis;[12] in three subsequent synthetic steps, including a chemical reacylation, the antifungal drug anidulafungin[11][13] is synthesized.

Aspergillus nidulans. Anidulafungin is an echinocandin, a class of antifungal drugs that inhibits the synthesis of 1,3-β-D-glucan, an essential component of fungal cell walls.

ERAXIS (anidulafungin) is 1-[(4R,5R)-4,5-dihydroxy-N -[[4“-(pentyloxy)[1,1′:4′,1”-terphenyl]-4-yl]carbonyl]-L-ornithine]echinocandin B. Anidulafungin is a white to off-white powder that is practically insoluble in water and slightly soluble in ethanol. In addition to the active ingredient, anidulafungin, ERAXIS for Injection contains the following inactive ingredients:

The empirical formula of anidulafungin is C58H73N7O17 and the formula weight is 1140.3. The structural formula is

Echinocandin B (ECB) is a lipopeptide composed of a complex cyclic peptide acylated at the N-terminus by linoleic acid. Enzymatic deacylation of ECB provided the peptide “nucleus” as a biologically inactive substrate from which novel ECB analogs were generated by chemical reacylation at the N-terminus. Varying the acyl group revealed that the structure and physical properties of the side chain, particularly its geometry and lipophilicity, played a pivotal role in determining the antifungal potency properties of the analog. Using CLOGP values to describe and compare the lipophilicities of the side chain fragments, it was shown that values of > 3.5 were required for expression of antifungal activity. Secondly, a linearly rigid geometry of the side chain was the most effective shape in enhancing the antifungal potency. Using these parameters as a guide, a variety of novel ECB analogs were synthesized which included arylacyl groups that incorporated biphenyl, terphenyl, tetraphenyl, and arylethynyl groups. Generally the glucan synthase inhibition by these analogs correlated well with in vitro and in vivo activities and was likewise influenced by the structure of the side chain. These structural variations resulted in enhancement of antifungal activity in both in vitro and in vivo assays. Some of these analogs, including LY303366 (14a), were effective by the oral route of administration.

Many years ago anidulafungin 1 was identified as a potentially useful medicine for the treatment of fungal infections. Its chemical and physical properties as a relatively high molecular weight semisynthetic derived from echinocandin B proved to be a significant hurdle to its final presentation as a useful medicine. It has recently been approved as an intravenous treatment for invasive candidaisis, an increasingly common health hazard that is potentially life-threatening. The development and commercialization of this API, which is presented as a molecular mixture of anidulafungin and d-fructose is described. This includes, single crystal X-ray structures of the starting materials, the echinocandin B cyclic-peptide nucleus (ECBN·HCl) and the active ester 1-({[4′′-(pentyloxy)-1,1′:4′,1′′-terphenyl-4-yl]carbonyl}oxy)-1H-1,2,3-benzotriazole (TOBt). Details of the structure and properties of starting materials, scale-up chemistry and unusual crystallization phenomena associated with the API formation are discussed.