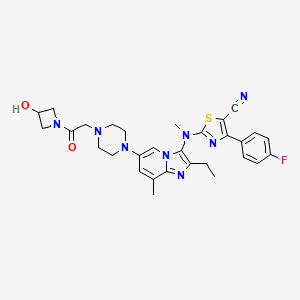 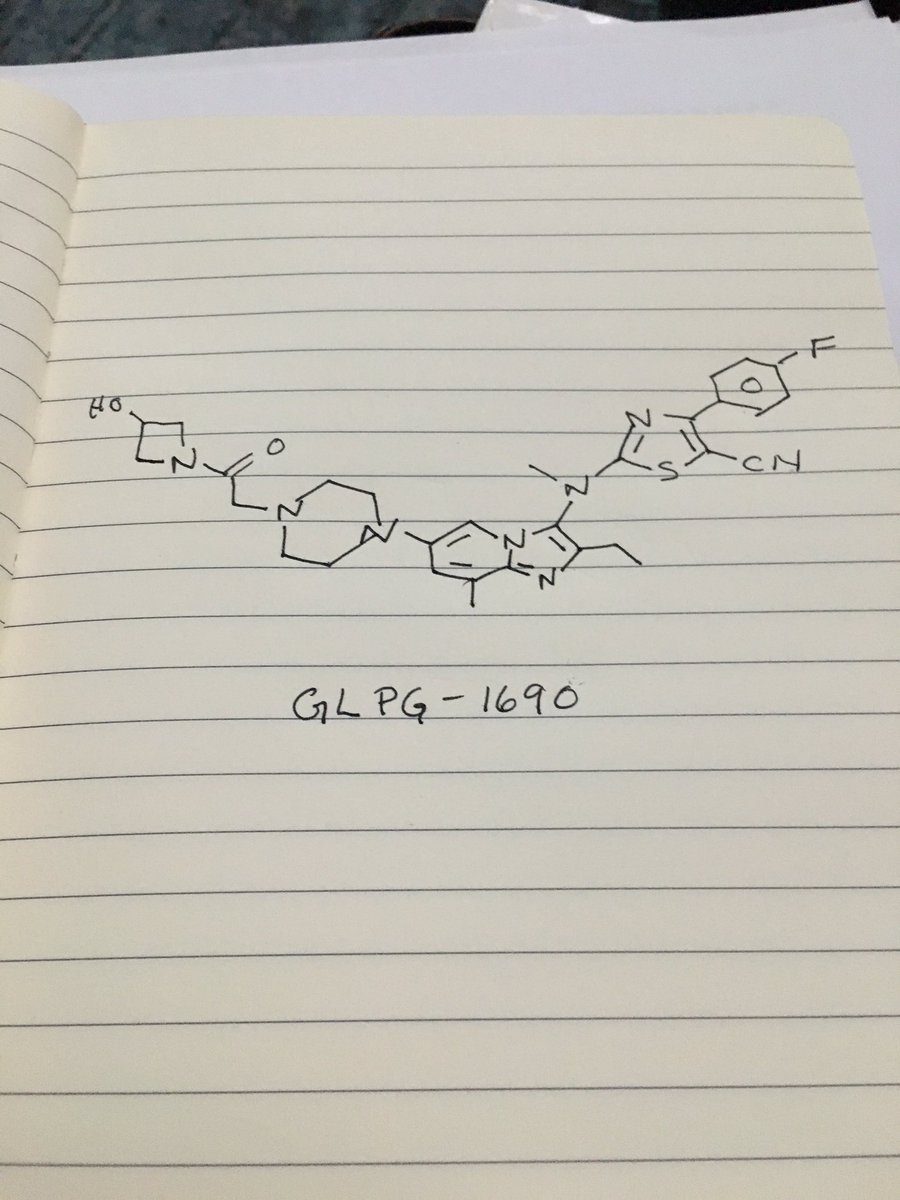 GLPG1690 is a selective autotaxin inhibitor discovered by Galapagos, with potential application in idiopathic pulmonary disease (IPF). In a Phase 1 study in healthy human volunteers, GLPG1690 demonstrated favorable safety and tolerability, as well as a strong pharmacodynamic signal implying target engagement. Galapagos is currently preparing a Phase 2 study in IPF, to be filed for approval before the end of 2015. GLPG1690 is fully proprietary to Galapagos.

MECHELEN, Belgium, March 16, 2015 (GLOBE NEWSWIRE) — Galapagos NV (Euronext: GLPG) announced that Janssen Pharmaceutica NV and Galapagos have mutually agreed to terminate the inflammation alliance and option agreements between the companies.  Galapagos views the molecules emerging from the alliance as strong additions to its growing proprietary pipeline.  Among others, all rights to candidate drug GLPG1690, a selective autotaxin inhibitor, return to Galapagos.  Galapagos has successfully completed a First-in-Human Phase 1 trial for GLPG1690 and is preparing a Phase 2 clinical trial in idiopathic pulmonary fibrosis (IPF).

“We are pleased to regain the rights to GLPG1690 to pursue the most suitable clinical application of autotaxin inhibition.  There is a large unmet medical need in IPF, and our pre-clinical data with GLPG1690 supports its potential as a competitive and novel approach in this disease area,” said Dr Piet Wigerinck, Chief Scientific Officer of Galapagos.  “The alliance with Janssen has been underway since October 2007 and has generated three clinical molecules, two of which are now proprietary Phase 2 assets of Galapagos: GLPG1205 and GLPG1690.  This program is a valuable component of our development portfolio, and regaining the rights is a next step in our transformation into a mature biotech company with a proprietary product pipeline.”

Galapagos identified autotaxin as playing a key role in inflammation, using an inflammation assay in its unique target discovery platform.  Pharmacology and translational studies published by other parties in the literature since then suggest autotaxin may play a key role in metabolic disease, arthritic pain, oncology, and lung disease.

GLPG1690 is a potent and selective inhibitor of autotaxin.  In a Phase 1 study in healthy human volunteers, GLPG1690 demonstrated favorable safety and tolerability, as well as a strong pharmacodynamic signal implying target engagement.  Galapagos is currently preparing a Phase 2 study in IPF, to be filed for approval before the end of 2015.

About IPF
Idiopathic pulmonary fibrosis (IPF) is a chronic and ultimately fatal disease characterized by a progressive decline in lung function.  Pulmonary fibrosis involves scarring of lung tissue and is the cause of shortness of breath.  Fibrosis is usually associated with a poor prognosis.  The term “idiopathic” is used because the cause of pulmonary fibrosis is still unknown.  Estimated incidence of IPF is up to 16.3 per 100,000 persons in the US and 7.4 per 100,000 persons in Europe, with approximately 30,000-35,000 new patients diagnosed with IPF worldwide each year.  The goals of treatment in IPF are essentially to reduce the symptoms, slow down disease progression, reduce acute exacerbations, and prolong survival.  Approved treatments thus far have improved the overall survival of IPF patients, but unwanted side effects with these treatments are common, presenting an unmet need for effective treatments with safer side effect profiles.

Galapagos is the first to show efficacy of an autotaxin inhibitor in pre-clinical models for COPD and IPF, pointing to novel therapeutic areas for autotaxin inhibition. The poster shows how GLPG1690 acts as a potent inhibitor of mouse and human autotaxin (IC50: 100 -500 nM range).  Furthermore, GLPG1690 reduces inflammation in a mouse steroid-resistant tobacco smoke model to a similar extent as a standard therapy for COPD.

GLPG1690 was safe and well tolerated up to a single oral dose of 1500 mg and up to 1000 mg twice daily for 14 days, with no significant adverse effects on ECGs, vital signs or laboratory parameters.  The compound also showed good oral bioavailability with a half-life of 5 hours and a dose-proportional increase in exposure.  GLPG1690 showed concentration-dependent reduction of a relevant biomarker (plasma LPA18:2 levels) with a maximum of approximately 90%.  At steady state, continuous reduction of this biomarker levels of >60% was observed from 0 to 24 hours.  The presentation will also include relevant pre-clinical model data for COPD and IPF with GLPG1690.

Both the presentation and the posters will be made available on the Galapagos website after the conference.

Galapagos (Euronext & NASDAQ: GLPG) is a clinical-stage biotechnology company specialized in the discovery and development of small molecule medicines with novel modes of action, with a pipeline comprising three Phase 2 programs, two Phase 1 trials, five pre-clinical studies, and 20 discovery small-molecule and antibody programs in cystic fibrosis, inflammation, and other indications.  In the field of inflammation, AbbVie and Galapagos signed a collaboration agreement for the development and commercialization of filgotinib.  Filgotinib is an orally-available, selective inhibitor of JAK1 for the treatment of rheumatoid arthritis and potentially other inflammatory diseases, currently in Phase 2B studies in RA and in Phase 2 in Crohn’s disease. Galapagos reported good activity and a favorable safety profile in both the DARWIN 1 and 2 trials in RA.  AbbVie and Galapagos also signed a collaboration agreement in cystic fibrosis to develop and commercialize molecules that address mutations in the CFTR gene.  Potentiator GLPG1837 is currently in a Phase 1 trial, and corrector GLPG2222 is at the pre-clinical candidate stage.  GLPG1205, a first-in-class inhibitor of GPR84 and fully-owned by Galapagos, is currently being tested in a Phase 2 proof-of-concept trial in ulcerative colitis patients.  GLPG1690, a fully proprietary, first-in-class inhibitor of autotaxin, has shown favorable safety in a Phase 1 trial and is expected to enter Phase 2 in idiopathic pulmonary fibrosis.  The Galapagos Group, including fee-for-service subsidiary Fidelta, has approximately 400 employees, operating from its Mechelen, Belgium headquarters and facilities in The Netherlands, France, and Croatia.  More info at www.glpg.com

The aim of the Phase 1 study was to evaluate the safety, tolerability, pharmacokinetics, and pharmacodynamics of oral single and multiple ascending doses of GLPG1690.  The randomized, double-blind, placebo-controlled, single center study was conducted in 40 healthy volunteers in Belgium.  In the first part of the study, single ascending doses were evaluated.  In the second part, the new compound was administered daily for 14 days.

GLPG1690 proved to be safe and well-tolerated over a wide dose range in healthy volunteers.  Engagement of the thus far undisclosed novel target was confirmed using a relevant biomarker. GLPG1690 displayed a favorable pharmacokinetic and pharmacodynamic profile.  The data shown in Phase 1 encourage Galapagos to explore a Phase 2 study design in pulmonary disease.

“GLPG1690 is the first molecule against this target ever to be evaluated clinically, and we are pleased with the outcome of the Phase 1 study,” said Dr Piet Wigerinck, CSO of Galapagos.  “Galapagos continues to deliver novel therapeutics from its unique target and drug discovery engine.”