A vasopressin (AVP) V2 antagonist potentially for treatment of heart failure and hyponatremia.

Lixivaptan (VPA-985) is a phase III pharmaceutical being developed by Cardiokine, Inc., a specialty pharmaceutical company based in Philadelphia, PA, focused on the development of pharmaceuticals for the treatment and prevention of cardiovascular diseases. Lixivaptan is, as of May 2010, in Phase III clinical trials involving patients with hyponatremia, including those with concomitant heart failure.[1] Hyponatremia is an electrolyte disturbance in which the sodium concentration in the serum is lower than normal. Lixivaptan may help some patients eliminate excess fluids while retaining electrolytes.

ChemistryLixivaptan is synthesized as follows:[2]

Lixivaptan is a potent, non-peptide, selective vasopressin 2 receptor antagonist. The oral capsule works by reducing the action of the hormone vasopressin that blocks fluid excretion. Lixivaptan acts by blocking vasopressin, an anti-diuretic hormone that causes the kidneys to retain water. When the body needs to remain hydrated under certain conditions, vasopressin can have protective effects. But an excess of vasopressin is counterproductive in a body retaining too much fluid. The drug shows promise in treating heart failure in patients with hyponatremia.

In February 2008, Cardiokine and its worldwide partner, Biogen Idec, initiated THE BALANCE (Treatment of HyponatrEmia BAsed on LixivAptan in N Yha class III/IV Cardiac patient Evaluation) study. THE BALANCE study is a 650-patient Phase III, global, multi-center, randomized, placebo-controlled, double-blind, study of lixivaptan for hyponatremia in patients with heart failure. The primary objective is to evaluate the safety and effectiveness of lixivaptan, when compared to the placebo, in increasing serum sodium from baseline in heart failure patients with hyponatremia.[3][4]

In previous studies, lixivaptan improved blood sodium levels, lowered body weight and increased urine volume. Those studies suggest that lixivaptan may play an important role in treating hyponatremia and the signs and symptoms of water retention associated with heart failure, Syndrome of Inappropriate Anti-Diuretic Hormone(SIADH), and Liver Cirrhosis with Ascites (LCWA). In clinical trials involving patients with water volume overload, lixivaptan resulted in correction of hyponatremia together with marked aquaresis.

The vasopressin receptor antagonists, dubbed vaptans, target the vasopressin hormonal feedback system. Vasopressin, also called the anti-diuretic hormone or ADH, is an important part of regulation in the circulatory system and is integral to the balance of water in the body. As a fundamental part of hormonal control in the body, it is implicated in many different conditions. Vaptans can be administered orally or intravenously. They work by competing for the active sites on cells meant for vasopressin binding—in this way, the vasopressin is blocked from acting, which earns the title of vasopressing antagonists.

Lixiputan (Lixivaptan, I) is pressurized by a Wyeth (wyeth) research and development of non-peptide hormone arginine oral selective V2 receptor antagonist, chemical name N- [3- chloro-4- (10, 11- dihydro -5H- pyrrolo [2,1-c] [1,4] benzodiazepine-10-yl carbonyl) phenyl] -5-fluoro-2- methylbenzamide. Clinical studies have shown that, compared with traditional diuretic, Lixiputan for the treatment of congestive heart failure (CHF), cirrhosis of hyponatremia and syndrome of inappropriate antidiuretic hormone secretion disorders (SIADH) patients, its in increase free water clearance without affecting renal sodium discharge, it will not activate the neuroendocrine system, and has a high safety and tolerability. Lixiputan V2 receptor selectivity higher than in May 2009 the FDA approved tolvaptan, Phase III clinical studies for the treatment of hyponatremia have been completed in the United States, in the pre-registration stage.

Document (Journalof medicinal chemistry, 1998,41 (14):. 2442-2444) reported Lixiputan there are two synthetic routes, one route to 10,11-dihydro -5H- pyrrolo [2, ι-c] [1,4] benzodiazepine (2) as raw materials, in turn with 2-chloro-4-nitrobenzoyl and 5-fluoro-2-methylbenzoyl docking, to obtain I; the second is the first line of 2-chloro-4-amino benzoic acid methyl ester (5) and 5-fluoro-2-methylbenzoyl chloride (7) butt, by hydrolysis, acylation reaction of 2-chloro-like -4 – [(5-fluoro-2-methylbenzoyl) amino] benzoyl chloride (10), and then with 2 reaction of I. 2 As the raw material is expensive, Route One to two as the starting material, the multi-step reaction, its low efficiency, high cost of production. Therefore, this study reference line two, 2-chloro-4-nitro-benzoic acid (3) as the starting material, by esterification, hydrogenation, acylation, hydrolysis, chloride, and so the reaction of 10; 10 and then with 2 After acylation reaction of N- I. I synthetic route follows.

The method for producing foreign products have been reported, such as the literature Journal of medicinalchemistry, 1998,41 (14):. 2442-2444 and US, 5516774 [P], 1996-5-14. Currently, Lixiputan (Iixivaptan) abroad in Phase III clinical studies, there are good prospects for development, given the value of the pharmaceutical compounds, high purity, with a very determined and reproducible crystalline compounds are important .

The present inventors have repeated the document US, 5,516,774 Lixiputan method of purity, obtained was 97.5%, mpl91-195 ° C, by the study of a plurality of batches, the melting point of the same, by a powder X- ray diffraction pattern See

The method reported in [0026] 1996-5-14. Preclude the use of the route of the present invention is represented by the following reaction: 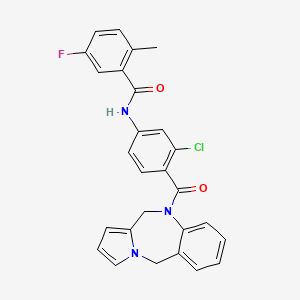