Gotu Kola (Centella asiatica), this herb is known for calming depressive episodes, strengthening cognitive function, and helping one deal with both mental and physical stress

Gotu Kola (Centella asiatica) – An antiseptic, antispasmodic, peripheral vasodilator, and nerving and relaxant, this herb is known for calming depressive episodes, strengthening cognitive function, and helping one deal with both mental and physical stress.

Centella asiatica, commonly known as centella and gotu kola, is a small, herbaceous, annual plant of the family Mackinlayaceae or subfamily Mackinlayoideae of family Apiaceae, and is native to wetlands in Asia.[2][3] It is used as a medicinal herb in Ayurvedic medicine,traditional African medicine, and traditional Chinese medicine. It is also known as the Asiatic pennywort or Indian pennywort in English, among various other names in other languages.

Centella grows in tropical swampy areas.[4] The stems are slender, creeping stolons, green to reddish-green in color, connecting plants to each other. It has long-stalked, green, reniform leaves with rounded apices which have smooth texture with palmately netted veins. The leaves are borne on pericladial petioles, around 2 cm. The rootstock consists of rhizomes, growing vertically down. They are creamish in color and covered with root hairs.[5]

The flowers are white or pinkish to red in color, born in small, rounded bunches (umbels) near the surface of the soil. Each flower is partly enclosed in two green bracts. The hermaphrodite flowers are minute in size (less than 3 mm), with 5-6 corolla lobes per flower. Each flower bears five stamens and two styles. The fruit are densely reticulate, distinguishing it from species of Hydrocotyle which have smooth, ribbed or warty fruit.[3] The crop matures in three months, and the whole plant, including the roots, is harvested manually.

Centella grows along ditches and in low, wet areas. In Indian and Southeast Asian centella, the plant frequently suffers from high levels of bacterial contamination, possibly from having been harvested from sewage ditches. Because the plant is aquatic, it is especially sensitive to pollutants in the water, which are easily incorporated into the plant. Bai bua bok served as a refreshing drink in Thailand

Centella is used as a leafy green in Sri Lankan cuisine, where it is called gotu kola. In Sinhalese, gotu is translated as “conical shape” andkola as “leaf”. It is most often prepared as malluma (මැල්ලුම), a traditional accompaniment to rice and curry, and goes especially well with vegetarian dishes, such as dhal, and jackfruit or pumpkin curry. It is considered quite nutritious. In addition to finely chopped gotu kola,malluma almost always contains grated coconut, and may also contain finely chopped green chilis, chili powder, turmeric powder and lime(or lemon) juice. A variation of the nutritious porridge known as kola kenda is also made with gotu kola by the Sinhalese people of Sri Lanka. Kola Kenda is made with very well-boiled red rice (with extra liquid), coconut milk and gotu kola, which is pureed. The porridge is accompanied with jaggery for sweetness. Centella leaves are also used in sweet “pennywort” drinks.

In Indonesia, the leaves are used for sambai oi peuga-ga, an Aceh type of salad, and is also mixed into asinan in Bogor.

In Vietnam and Thailand, this leaf is used for preparing a drink or can be eaten in raw form in salads or cold rolls. In Bangkok, vendors in the famous Chatuchak Weekend Market sell it alongside coconut, roselle, chrysanthemum, orange and other health drinks.

In Malay cuisine the leaves of this plant are used for ulam, a type of Malay salad.[6]

It is one of the constituents of the Indian summer drink thandaayyee.

In Bangladeshi cuisine mashed centella is eaten with rice and is popular for its medicinal properties. 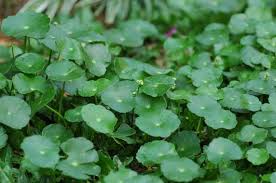 According to the American Cancer Society, although centella is promoted for its health benefits, “available scientific evidence does not support claims of its effectiveness for treating cancer or any other disease in humans”.[7] However some research has shown a possible health benefit in the form of reduction of the progression of subclinical arterial lesions in low-risk asymptomatic subjects.[8]

In India, particularly, it is popularly known by a variety of names: bemgsag, brahma manduki, brahmanduki, brahmi, ondelaga or ekpanni (south India, west India), sarswathi aku(Andhra Pradesh), gotu kola, khulakhudi, mandukparni, mandookaparni, or thankuni (Bengal), depending on region. Bacopa monnieri is the more widely known Brahmi; both have some common therapeutic properties in Vedic texts and are used for improving memory. C. asiatica is called brahmi particularly in north India,[9][10] although that may be a case of mistaken identity introduced during the 16th century, when brahmi was confused with mandukaparni, a name for C. asiatica.[11] [12] Probably the earliest study ofmandookaparni as medya rasayana (improving the mental ability) was carried out at the Dr. A. Lakshmipathy Research Centre (now under CCRAS).[13] 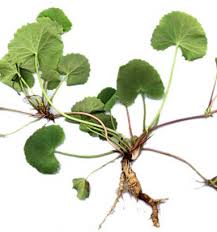 Gotu kola is a minor feature in the longevity tradition of the T’ai chi ch’uan master Li Ching-Yuen. He purportedly lived to be 197 or 256, due in part to his usage of traditionalChinese herbs, including gotu kola.

By DR ANTHONY MELVIN CRASTO Ph.D in AYURVEDA on July 28, 2014.
← Oat Straw (Avena sativa) helpful in calming the nerves of those who are detoxing from drug or alcohol addiction, and can even help curb nicotine cravings. Golden Root (Rhodiola rosea)…….a queen of adaptogenic herbs →