Doxofylline (INN), (also known as doxophylline) is a xanthine derivative drug used in the treatment of asthma.[1]

It has antitussive and bronchodilator[2] effects, and acts as aphosphodiesterase inhibitor.[3]

In animal and human studies, it has shown similar efficacy to theophylline but with significantly fewer side effects.[4]

Unlike other xanthines, doxofylline lacks any significant affinity for adenosine receptorsand does not produce stimulant effects. This suggests that its antiasthmatic effects are mediated by another mechanism, perhaps its actions on phosphodiesterase.[1] 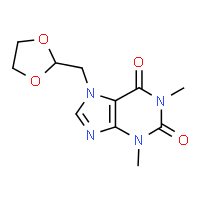 Doxofylline, [7-(1, 3-dioxolan-2-ylmethyl)-3, 7-dihydro-1, 3-dimethyl-1H-purine-2, 6-dione] is a new bronchodilator xanthine based drug which differs from theophylline by the presence of dioxalane group at position 7. It is used in the treatment of bronchial asthma, chronic obstructive pulmonary disease (COPD), and chronic bronchitis . The mechanism of action is similar to that of theophylline in that it inhibits phosphodiesterase (PDE-IV), thereby preventing breakdown of cyclic adenosine monophosphate (cAMP). Increase in cAMP inhibits activation of inflammatory cells resulting in bronchodilating effect [52]. In contrast to theophylline, doxofylline has very low affinity towards adenosine A1 and A2 receptors which explain its better safety profile

Doxofylline (7-(l,3-dioxalan-2-ylmethyl)-theophylline) is a drug derived from theophylline which is used in therapy as a bronchodilator, with anti-inflammatory action, in reversible airway obstruction. It is commonly administered in doses ranging from 800 to 1200 mg per day, orally, according to a dosage which provides for the intake of two to three dosage units per day in order to maintain therapeutically effective haematic levels. The doxofylline tablets commercially available generally contain 400 mg of active ingredient and release almost all the drug within one hour from intake. The half- life of the drug is around 6-7 hours and for this reason several administrations are required during the 24-hour period.

Obviously a drop in haematic concentration of the drug in an asthmatic patient or patient suffering from COPD (chronic obstructive pulmonary disease) can result in serious consequences, in which case the patient must have recourse to rescue medication, such as salbutamol inhalers.

Pharmaceutical techniques for obtaining the modified release of drugs have been known for some time, but no modified release formulation of doxofylline is known. In fact the present inventors have observed that there are significant difficulties in the production of a doxofylline formula that can be administered only once a day and in particular have encountered problems correlated with bioequivalence.

Various attempts to formulate doxofylline in modified release systems, with different known polymers, have not provided the desired results, i.e. a composition that can be administered once a day, bio equivalent to the plasmatic concentration obtained with the traditional compositions currently on sale. In fact currently, dosage units containing 400 mg of active ingredient are currently administered two/three times a day for a daily average of approximately 1000 mg of active ingredient, a dosage considered necessary to maintain the therapeutic haematic levels of doxofylline.

Xanthine is a dioxypurine that is structurally related to uric acid. Xanthine can be represented by the following structure:

Caffeine, theophylline and theobromine are methylated xanthines. Methylated xanthines such as caffeine and theophylline are typically used for their bronchodilating action in the management of obstructive airways diseases such as asthma. The bronchodilator effects of methylxanthines are thought to be mediated by relaxation of airway smooth muscle. Generally, methylxanthines function by inhibiting cyclic nucleotide phosphodiesterases and antagonizing receptor-mediated actions of adenosine.

Theophylline can be represented by the following structure:

However, when administered intravenously or orally, theophylline has numerous undesired or adverse effects that are generally systemic in nature. It has a number of adverse side effects, particularly gastrointestinal disturbances and CNS stimulation. Nausea and vomiting are the most common symptoms of theophylline toxicity. Moderate toxicity is due to relative epinephrine excess, and includes tachycardia, arrhythmias, tremors, and agitation. Severe toxicity results in hallucinations, seizures, dysrhythmias and hypotension. The spectrum of theophylline toxicity can also include death.

Furthermore, theophylline has a narrow therapeutic range of serum concentrations above which serious side effects can occur. The pharmacokinetic profile of theophylline is dependent on liver metabolism, which can be affected by various factors including smoking, age, disease, diet, and drug interactions.

Generally, the solubility of methylxanthines is low and is enhanced by the formation of complexes, such as that between theophylline and ethylenediamine (to form aminophylline). The formation of complex double salts (such as caffeine and sodium benzoate) or true salts (such as choline theophyllinate) also enhances aqueous solubility. These salts or complexes dissociate to yield the parent methylxanthine when dissolved in aqueous solution. Although salts such as aminophylline have improved solubility over theophylline, they dissociate in solution to form theophylline and hence have similar toxicities.

Dyphylline is an effective bronchodilator that is available in oral and intramuscular preparations. Generally, dyphylline possesses less of the toxic side effects associated with theophylline.

current domestic Doxofylline synthetic methods reported in the literature are: 1, CN Application No. 94113971.9, the name “synthetic drugs Doxofyllinemethod” patents, the patent is determined by theophylline with a 2 – (halomethyl) -1,3 – dimethoxy-dioxolane in a polar solvent, with a base made acid absorbent,Doxofylline reaction step. 2,  CN Application No. 97100911.2, entitled “Synthesis of Theophylline,” the patent, the patent is obtained from 7 – (2,2 – dialkoxy-ethyl) theophylline with ethylene glycol in N, N-dimethylformamide solvent with an alkali metal carbonate to make the condensing agent, p-toluenesulfonic acid catalyst in the condensation Doxofylline.

Doxofylline of xanthine asthma drugs, and its scientific name is 7 – (1,3 – dioxolan – ethyl methyl) -3,7 – dihydro-1,3 – dimethyl-1H – purine-2 ,6 – dione. The drug developed by the Italian Roberts & Co. in 1988, listed its tablet tradename Ansimar. This product is compared with similar asthma drugs, high efficacy, low toxicity, oral LD50 in mice is 1.5 times aminophylline, non-addictive. Adenosine and its non-blocking agents, it does not produce bronchial pulmonary side effects, no aminophylline like central and cardiovascular system. U.S. patent (US4187308) reported the synthesis of doxofylline, theophylline and acetaldehyde from ethylene glycol p-toluenesulfonic acid catalyst in the reaction of benzene as a solvent Doxofylline. Theophylline acetaldehyde by the method dyphylline derived reaction with a peroxy periodate or 7 – (2,2 – dialkoxy-ethyl) ammonium chloride aqueous solution in the decomposition of theophylline converted to acetaldehyde theophylline . Former method is relatively complex, and the high cost of using periodic acid peroxide, low yield after France. And theophylline acetaldehyde and ethylene glycol solvent used in the reaction of benzene toxicity, harm to health, and the yield is low, with an average around 70%, not suitable for industrial production.

Theophylline-7-acetaldehyde (I) could react with ethylene glycol (II) in the presence of p-toluenesulfonic acid in refluxing benzene to produce Doxofylline.

Doxofylline can be prepared by N-alkylation of theophylline (I) with bromoacetaldehyde ethylene glycol acetal (II) using Na2CO3 in refluxing H2O (1).

A mixture of 15 g of theophyllineacetic aldehyde, 30 ml of ethylene glycol and 1.5 g of p-toluenesulphonic acid in 600 ml of benzene is heated under reflux in a flask provided with a Marcusson apparatus.

After two hours the separation of the water is complete.

The reaction mixture is washed with 200 ml of a 3.5% aqueous solution of sodium bicarbonate.

The organic phase is dried and concentrated to dryness under reduced pressure, to leave a product residue which is taken up in ethyl ether, separated by filtration and purified by ethanol.

a, anhydrous theophylline and bromoacetaldehyde ethylene glycol as the basic raw material, purified water as a solvent with anhydrous sodium carbonate as acid-binding agent;

I n case Images are blocked on your computer, VIEW AT

Although various bioanalytical methods for estimation of doxofylline in …. 1H and 13C-NMR spectra of doxofylline and its degradation products were recorded by….. CLICK ABOVE

1H and 13C-NMR spectra of doxofylline and its degradation products were recorded by using Bruker NMR 300MHz instrument with a dual broad band probe and z-axis gradients. Spectra were recorded using DMSO-d6 as a solvent and tetramethylsilane as an internal standard.
4.2.6 Validation